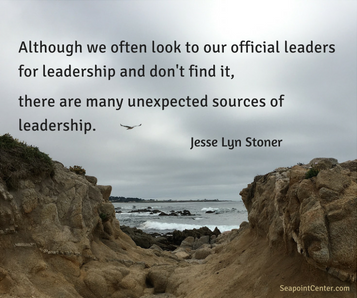 Leadership is not something you can provide. The definition of provide is “to offer, give, supply, or make available for use.” You can provide food, shelter, and even sympathy.

But leadership is not a matter of simply “offering” or “providing.” For leadership to occur, a response is required.

Leadership is a phenomenon that occurs when one influences the direction people are going and unites them toward accomplishing a common goal.

We often look to our official leaders for leadership and don’t find it there.

The conundrum is that although you can’t force leadership, leadership often emerges under unexpected circumstances. Sometimes unrecognized or unappreciated, it is leadership nonetheless.

We often see this in groups where a respected team member, who is not an official leader, has a major impact on the group. Although their suggestions carry a lot of weight and influence the direction of the team, the individual (and often the entire team) would not describe what is happening as leadership. Although leadership is occurring, it is unconscious and unrecognized. And therefore, there is a lost opportunity to maximize its value.

Have you ever seen someone take on tremendous responsibility and mobilize a group for great accomplishment, complaining about their role the entire time? The individual really didn’t want to assume leadership, but there was a void and so they stepped up. You might even have experienced this yourself. One reason they often don’t call it leadership is because they don’t want to get saddled with the responsibility again.

Sometimes leadership does not occur until after someone has died. During his lifetime, Vincent van Gogh sold only two paintings, yet went on to “influence decades of artists that followed” and is now recognized for leading the way from impressionism into the modern era of art. Paul Gauguin, also unrecognized during his lifetime, is known today for leadership in the Symbolist movement and paving the way for the new styles of the famous painters who followed.

Emergent leadership is a common occurrence in high performance teams. Leadership emerges depending on who has the needed skills, knowledge or attitude in each moment, and at various times each team member significantly influences the team. If you observe a high performance team without knowing who the official leader is, chances are you would not be able to identify that person because leadership is sparking all over the place.