A definition of leadership for these pressing times 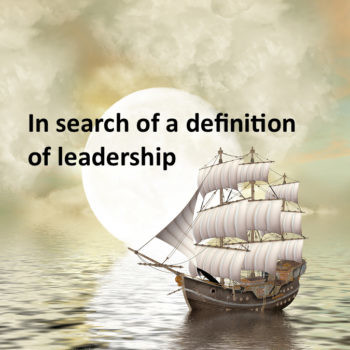 It’s pretty common these days to hear complaints about lack of leadership, poor leadership, and disappointment with those who are in leadership roles. In a recent World Economic Forum survey, 86% of the respondents reported they believe there is a leadership crisis in the world today.

But with all this talk about leadership, are we talking about the same thing? We make a lot of assumptions about what leadership means. Without a common definition of leadership, we are in danger of talking at cross-purposes with each other during the pressing conversations we need to have.

What is your definition of leadership?

Most dictionaries say “leadership is the act of leading.” The common definition of lead is:  Show the way to a destination by going in front; be in charge of or command. (Merriam-Webster, Oxford, et.al.) But these definitions are rooted in the assumption that leadership is based on authority and hierarchy, and not everyone holds this view.

The academic definitions don’t help much either. Management textbooks define leadership as:  The process of influencing others to support accomplishing a common goal (Northouse, Ivancevich, et.al, Jones, et.al.). But that leaves us with some important unanswered questions.

What’s the relationship between leader and leadership?

If a tree falls in the woods and no one hears it, is there a sound? If you attempt to lead and no one follows, are you really a leader?

You can lead the way by going where no one has gone before. But if no one follows, are you leading… or simply exploring?

The dictionary says “leadership is the act of leading”. But is leadership really an “act” or does it occur as result of followers responding?

James II of England succeeded his brother Charles II to the throne. Initially there was strong support for his accession. However, his pro-Catholic edicts in a strongly Protestant country were consistently resisted and within three years he was deposed. King James had the title of “leader” and history considers him a leader; but his followers did not follow, and he never provided leadership.

Is leadership simply a matter of influencing followers?

A recent Towers Watson study found 75% of all change initiatives were unsuccessful because leaders failed to get full support for the change from those who were needed to implement it. The leaders might have influenced their followers to accept the change and not actively resist it, but their leadership efforts failed because they did not mobilize people to actively support the initiative.

Leadership involves not simply influence, but specifically influence that unites followers around common goals and focuses their effort on achieving them.

How is this different from a definition of management?

Isn’t this what management is about? –  influencing people to do a good job in accomplishing the goals? How is leadership different?

The clue is in the origin of the word lead. It is derived from Old English lǣdan and Proto-Germanic laidijaną which mean “to go.”

If your leadership efforts are focused only on task-accomplishment and not on where you’re going, there is nowhere for people to follow. So we can add that leadership about going somewhere, not just about accomplishing a common goal.

Here’s my definition of leadership:

Pulling the pieces together, I have arrived at this definition:

Leadership is a phenomenon that occurs when one influences the direction people are going and unites them toward accomplishing a common goal.

This definition takes leadership out of the realm of power and control as it implies leadership is the result of a social contract, not simple cause and effect. Leadership is not reserved for the elite. Each moment holds a leadership opportunity. It shows that leaders whose intentions are divisive instead of to unite will not be successful in providing leadership. And it sets the stage to understand leadership from a perspective that:

What are your thoughts?

These are my thoughts…

I would love your hear yours! Do you have your own definition of leadership? a suggestion to tweak mine? some answers to my questions? or some additional questions of your own?

Photo Credit: Bigstock/justdd In search of a definition of leadership