How Does Your Team Vision Rate?
The 40 Best Leadership Quotes 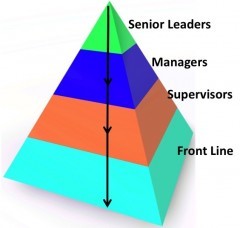 What’s your view of leadership? If you’re like most people, you have an underlying belief that leaders should be out in front of the line, leading the way.

The Hierarchical View of Leadership

There are differing views about how leaders should behave – the best leadership style. For example, you might think leaders should be directive or participative or both depending on the situation.

Although Steve Jobs, Hillary Clinton, Ronald Reagan, Sheryl Sandberg, and Howard Schultz have very different leadership styles, they all have one important thing in common – their role as a leader is to stand in front of their organization and lead the way forward. They are at the top of the pyramid.

Some people see the Inverted Pyramid as an alternative.  In this view of leadership, the pyramid is turned upside down, and leaders see themselves at the bottom of the pyramid, serving the people. 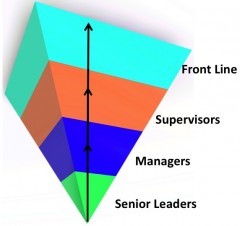 Leaders “serve” the people who report to them by providing what they need. The front line, the people who are in direct contact with customers,  are “empowered” by the senior leaders to make many decisions that affect customers.  Leaders who subscribe to this view of leadership include Herb Kelleher, Dan Cathy and Sally Jewell.

Leaders do not give away their power. Leadership is more like parents of teenagers, allowing freedom with oversight. It might be a loving style, but leaders still have responsibility for the people they manage.

This is still a pyramid, with a top and bottom, and with a clear line of reporting – a hierarchical view of leadership where those in control bestow power on others.

Instead of Inverting the Pyramid, Topple It 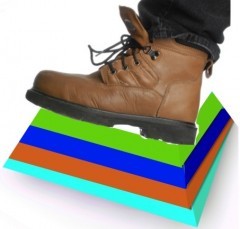 The problem is the hierarchical view of leadership is not nearly as effective as we would like to believe.

Too many people with the designated title of “leader” are not leading at all. Often the real leadership that occurs has nothing to do with the pyramid, whether it is right side up or upside down, because the people who make the most significant impact are hidden somewhere within the pyramid.

Leadership Is an Emergent Quality, Not a Role

There’s another way to view leadership – one we are all familiar with – where leadership is a quality that emerges when needed.

Anyone who has been a member of a high performing team knows that leadership flows among team members, depending on who has the needed skills, knowledge or attitude in the moment, and that at various times each team member significantly influences the team. A team that is dependent on one person will never fulfill its full potential.

Over the years, I have asked hundreds of people to list the top five qualities of a high performance team, and “shared leadership” is always on the list.

Perhaps you agree emergent leadership can work for a team, but think it’s not possible for a complex organization. Actually, the idea of a non-hierarchical company is not far-fetched at all.

In 1970 Alvin Toffler introduced the concept of adhocracy, where “all members of an organization have the authority within their areas of specialization, and in coordination with other members, to make decisions and to take actions affecting the future of the organization.” This idea was further developed by Henry Mintzberg and others.

Morning Star, a highly successful manufacturing company, was founded in 1970. Still thriving today, it was described by Gary Hamel in First, Let’s Fire All the Managers (Harvard Business Review, 2011).

In Who’s the Boss? There Isn’t One, Rachel Silverman describes Gore and Valve (Wall Street Journal). And there are many more examples emerging as young entrepreneurs are discovering the control-oriented models stifle creativity and innovation.

In Making Sense of Zappos and Holocracy, Steve Denning provides an analysis of Zappos recent decision to get rid of managers. He demonstrates that “holocracy” will not lead to chaos, but unfortunately equates structure with hierarchy.

Hierarchy depends on the use of power to control outcomes, and the controls extend to the people within the organization. Even when the power is used benevolently, it is still a patriarchal view, and so the workers are by extension “children,” not adults. A shared vision and supporting structure are a far more effective alternative to hierarchical power.

Non-hierarchical Leadership Is Not a New Idea 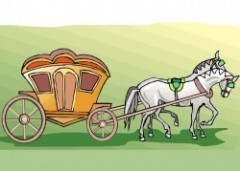 The emergent view of leadership can be traced to the 4th century BCE where Lao Tzu said, “When the best leader’s work is done the people say, ‘We did it ourselves.'”

The real nature of leadership can be such a light touch that it might not be noticed.

This 18th century tale illuminates leadership as a vehicle, not a role:

A story is told that one day as the great Rabbi Elimelech of Lizhensk was riding in a carriage, he noticed a throng of people following.

He asked his coachman, “Why are all the people trailing behind?”

The coachman explained that the people wanted to follow after wisdom and holiness.

Elimelech decided that this was a good idea — the people were doing the right thing.

So he got out and joined the people following the empty carriage.

IMPORTANT: Lessons for Leaders Within the Pyramid

Most of us work in hierarchical organizations that are not going to fundamentally change. But it’s not “all or nothing.” Even within a traditional organization, we can move in this direction at a personal level by 1) holding a vision of leadership as a function and not a role, 2) by aligning our intention consistently with our actions and 3) by supporting leadership when it does emerge.

Following these principles can make a big difference for yourself and your team:

1. Don’t confuse leadership with the carriage, the vehicle. You are an instrument, not your role.

2. Great leaders draw their understanding of what’s happening and what’s needed from the people who follow them.

3. Be willing to follow. Leadership is a dance, not a parade.

4. Challenge your perceptions of leadership. Notice and support emergent leadership when it occurs.

5. Remember your greatest source of influence is your character, not your role or position.

How Does Your Team Vision Rate?
The 40 Best Leadership Quotes