How To Turn Conflict into an Energy Source, NOT an Energy Drain 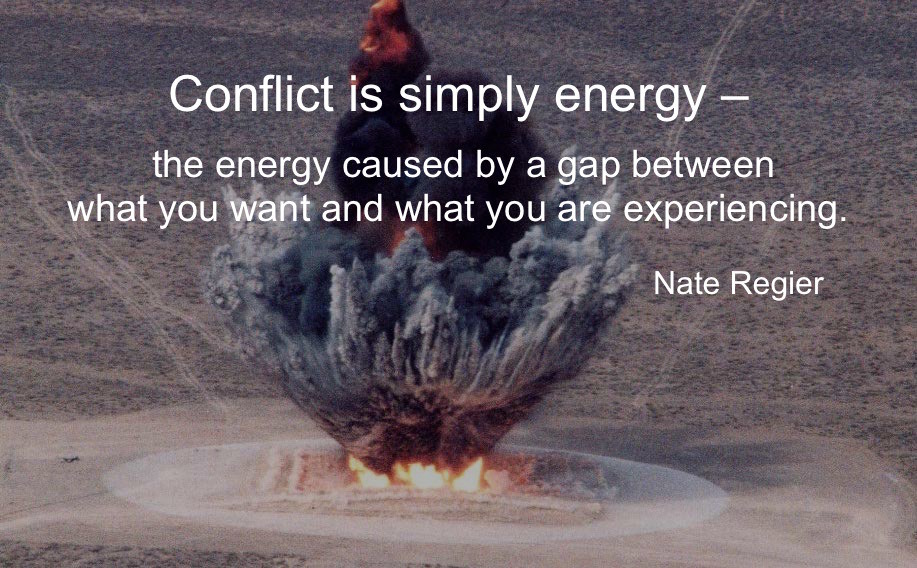 Ask anyone about “conflict” and you’ll most likely hear negative descriptions such as: painful, damaging, draining, upsetting, disrespectful, demeaning and relationship-destroying.

Most people dread conflict and can’t imagine how they could turn conflict into an energy source because they don’t understand what it really is.

Conflict is simply energy – the energy caused by a gap between what you want and what you are experiencing. The energy of conflict can be misused in “drama” or it can be harnessed to create something positive and useful.

The Cost of “Drama”

Drama is created by “struggling against self or others, with or without awareness, in order to feel justified about our negative behavior.” The energy drain of drama is expensive! Research estimates the cost of workplace drama at over $350 billion per year in the United States. The top energy drains caused by drama are: gossip, lack of follow-through, absenteeism, passive-aggressive behavior, resisting change, and unproductive meetings. One hospital lost $13 million on a new EMR system because interdepartmental drama sabotaged the implementation process.

People struggle against each other in drama in three predictable ways, according to Dr. Steven Karpman’s Drama Triangle.

Three Skills to Turn Conflict Into an Energy Source

Openness is the healthy alternative to being a victim. In conflict, many people avoid the real issues, compromising to keep the peace. Openness means acknowledging the discomfort of conflict. Be willing to be transparent about your emotions and motives, and give others permission to do the same. Empathizing and affirming others sends the message that people are worthwhile, their needs and feeling matter, and it is safe to have conflict. Opening up often reveals deeper desires and wants, which makes it much easier to address root causes. Here are some examples:

“I care deeply about this relationship and am worried where things are going.”
“I am anxious too. Mergers have so many unknowns.”
“It’s OK to be angry.”

Resourcefulness is the healthy alternative to being a rescuer. Help people solve their own problems instead of trying to solve them yourself. You do that by respecting autonomy and encouraging capability in others. Get curious and show a non-judgmental interest in all perspectives and options. Don’t worry about who’s right or wrong, instead focus on understanding and learning. Ask open-ended questions. Here are some examples:

“What information would be most helpful for you?”
“I would like to check some assumptions. May I share them with you and get your perspective?”
“I’m really curious about your perspective. Will you share more?”

Persistence is the healthy alternative to being a persecutor. Many people in conflict get distracted from the real issues. They focus so much on content of the conflict that they lose sight of what really matters. Or, they decide that everything matters, which creates an impossible dilemma for everyone.

Instead, step back, take perspective, and get crystal clear on what really matters. When principles, boundaries, and values are at stake, focus on the one or two that are most relevant. Separate the “what” from the “why.” Understand that behind most negative behavior is a positive, unmet need related to issues of respect, dignity, and emotional safety. Here are some example:

“Ultimately, I want to protect the trust of our stakeholders. I’ll support whatever we can do to achieve that.”
“I can tell how important decision-making autonomy is for you. I want to balance that with consistency in results and I am in 100%.”
“For me it boils down to transparency. I don’t want to do anything that undermines my credibility with the board of directors.”

Energy vampires use conflict energy to struggle against others in drama. Compassion heros leverage the positive power of conflict by struggling with others in a spirit of dignity.

By developing your openness, resourcefulness and persistence skills you can avoid the energy drain of drama, turn conflict into an energy source and leverage it for positive results.

To learn more about how to turn conflict into an energy source read Nate Regier’s best-selling new book Conflict Without Casualties: A Field Guide for Leading With Compassionate Accountability. 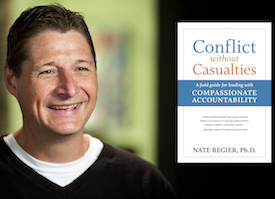 Nate Regier, Ph.D  is CEO and co-founding owner of Next Element, a global leadership training and certification firm specializing in communication and conflict skills. As an international keynote speaker, trainer, coach and consultant, Regier is an expert in social-emotional intelligence and leadership, positive conflict, group dynamics, interpersonal communication. He is a co-developer of Next Element’s Leading Out of Drama® training and coaching system and a Process Communication Model® certifying master trainer. He has also authored Beyond Drama: Transcending Energy Vampires, publishes a weekly blog, is a regular podcast guest, and writes for numerous publications.
Twitter: @NextNate | Facebook @NextElement | LinkedIn: Nate Regier