The Case for Culture Integration in Mergers and Acquisitions

7 Tips to Move From Vision to Reality
How To Turn Conflict into an Energy Source, NOT an Energy Drain 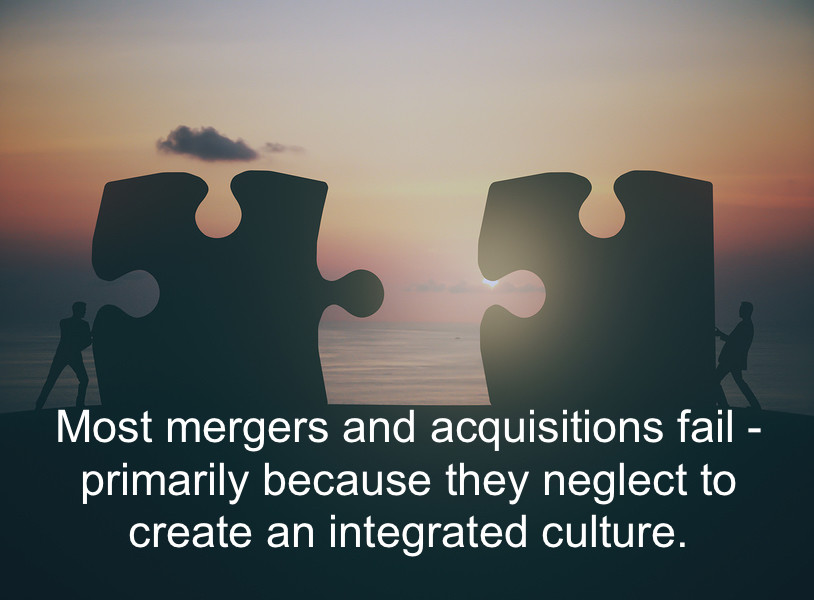 Expect an acceleration of merger and acquisition (M&A) activity in 2018. According to the latest research by Deloitte, over 1000 corporate and private equity executives report an anticipated increase in both the number of deals and the size of transactions.

These studies show that while deal activity continues to increase, the rate of deal failure is alarming – over 50% of mergers fail to meet their targets!

Culture integration issues were reported in every study as a primary factor in deal failure and has increasingly become recognized as a top issue in M&A.

The Consequences of Not Addressing Culture Integration

– Lack of agreement among leaders on the vision of desired culture. (48%)

– Lack of leadership support (44%) – giving lip service to the effort but shortchanging it on investment and attention.

– Inadequate communication and involvement of employees. (34%)

Allen&Overy concluded that dealmakers need to be “more aware of the need to manage the complex employment issues that inevitably arise before and during integration.”

What Successful Companies Do

According to research conducted by the Research and Analysis Division of The Economist Group, the sister company to The Economist newspaper, “The antidote to these problems is pro-active management of culture integration… Organisational cultural differences and human capital integration issues are the two most significant transaction issues faced, and dealmakers must pay close attention to people issues in every phase of the transaction.“

Companies that are successful in culture integration communicate and involve employees throughout the company in these eight activities, with the full attention and commitment of senior leadership:

4. Identify the desired behaviors and expectations.

8. Track progress towards the ideal culture.

7 Tips to Move From Vision to Reality
How To Turn Conflict into an Energy Source, NOT an Energy Drain