The True Test of a Vision 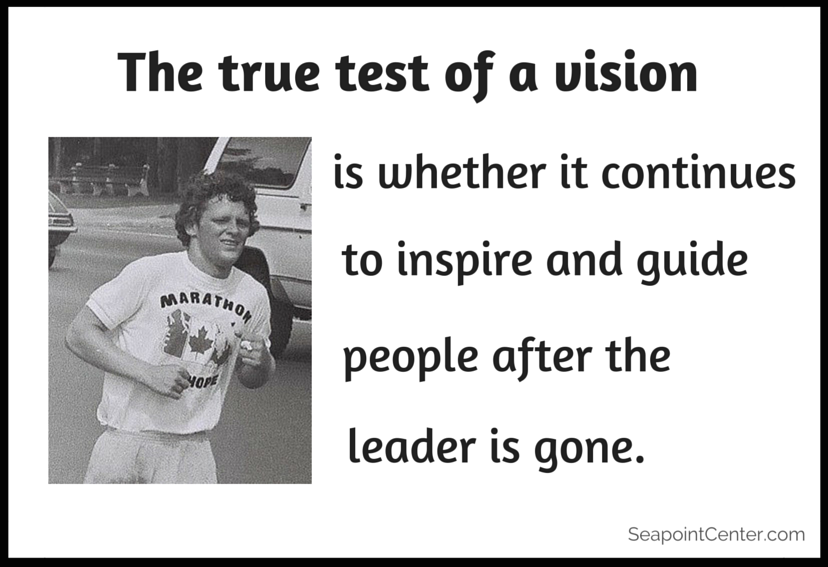 The true test of a vision is whether it continues to inspire and guide people after the leader is gone.

Consider the seamless transition at Southwest Airlines when founder Herb Kelleher stepped down compared with Disney’s two decades of floundering after the death of Walt Disney. Time and again, we see examples of companies that suffer when their charismatic leader leaves without having instilled a true vision.

In looking for examples of true vision, we usually draw on the vision of a few great leaders like Martin Luther King, Jr., Mahatma Gandhi, or Nelson Mandela

But passing the test of a vision is not as rare as it might seem. There are many wonderful examples of people whose story isn’t well-known, but whose vision has made a significant impact.

Terry Fox was a young man whose vision met this test.

Terry was awarded Athlete of the Year in 1975, his senior year of high school in British Columbia, Canada.

A few months after graduation, he discovered he had a malignant tumor, and his right leg was amputated four days later.

During his followup treatment, he was deeply affected by the suffering he witnessed at the cancer clinic, and his dream transformed into a vision – to run across Canada to raise a million dollars to fight cancer AND to change people’s attitudes toward people with disabilities by demonstrating what an amputee could do.

Terry trained every day for fifteen grueling months, until he could run twenty-three miles a day. Then, on April 12, 1980, he dipped his artificial leg in the Atlantic Ocean in St. John’s, Newfoundland, and began his run.

Terry ran 3,339 miles from Newfoundland, through six provinces. He was two-thirds of the way home, running close to a marathon a day for 144 days straight.

But on September 1, 1980, Terry had to stop. His cancer had recurred and had spread to his lungs. He flew home for treatment. And with his family beside him, Terry Fox died on June 28, 1981 — one month short of his 23rd birthday.

Terry did not complete his Marathon of Hope. But that wasn’t his vision. Running across Canada was his plan for how he would achieve his vision.

Terry’s vision was to raise $1 million dollars for cancer research and to increase awareness about disabilities.

In fact, Terry raised $23.4 million! And people everywhere saw him as an athlete and a hero, not a person with a disability.

The true test of a vision is that Terry’s vision didn’t end.

If you’re from Canada, most likely you already know the story of Terry Fox. If you would like to know more about Terry’s story, this ESPN video includes actual interviews with him and real footage of his Marathon of Hope.

When you watch the video you will see Terry talk about how deeply he was affected by the suffering of the other children in the cancer clinic. This was the source of his motivation and what gave rise to his vision – to use his abilities as an athlete to make a difference for them.