How to Recognize a Leader 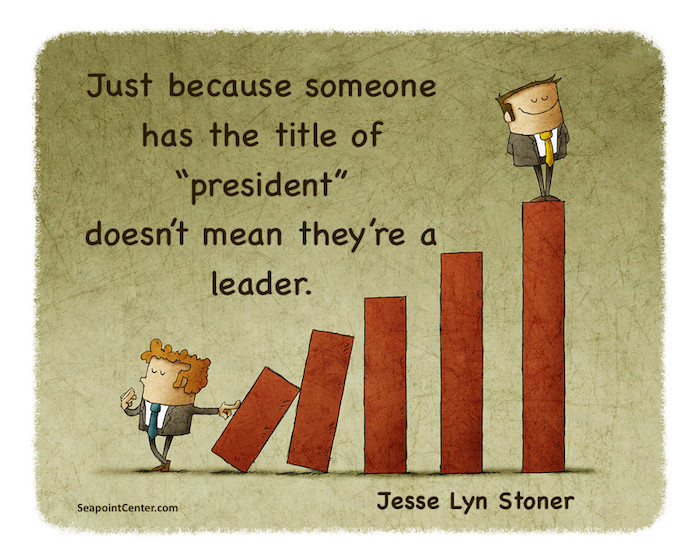 How do you recognize who’s a leader? Is it the person telling everyone what to do?

Not necessarily. If he is being ignored, he is only talking to himself.

Is it the person giving directions? Telling people where to go?

An usher in the theater, who tells you which entrance to use, is not a leader. He is not influencing your course of action. He is just giving you information.

A police officer directing traffic is not a leader. You might go where you’re told, but he has not influenced your point of view.

A police officer, an usher, a dictator, a jailor . . . these are not leaders.

How do you recognize a leader?

It’s not by their location. A leader can be out in front, in the middle or following behind.

You recognize a leader by the response of their followers.

A leader is someone who influences others to follow a course of action when they have a choice.

A leader is the person who says to others, “follow me!” And they do.

A leader is the person who suggests, “I think this is the way to go.” And people go there.

A leader is the person who takes action. And others join in.

A leader is the person on the ball court who signals to throw the ball to them, and they do.

A leader is the person who does something new and others begin to do it also.

A leader has genuine followers, people who follow of their own volition.

If a leader shouts in the woods and no one hears them, are they a leader? No.

If you think you’re a leader and no one is following, you’re simply taking a walk. (Afghan Proverb)

What if you have a few followers? Are you a leader?

You leadership impact is measured by the percentage of followers within your sphere of influence.

If you are leader of a ten-person team and only two of them follow you, you are not leading. To be a team leader, your sphere of influence must include your entire team.

To lead an organization, your sphere of influence must encompass a “critical mass” –  a large enough percentage of the organization to tilt the balance.

Your leadership is measured, not by what people do when you’re there, but by what they do when you’re not present – when no one is watching and they have the freedom to make personal choices.

Who do people follow when they have a choice?

Leaders who articulate a vision they believe in.

Leaders who seem to be competent and know what they are doing.

Leaders whose character they respect.

A person could have the title of president and not be a leader. But if you look closely, you can recognize who the real leaders are.

Photo credit: Bigstock/JRCasas | How to Recognize a Leader