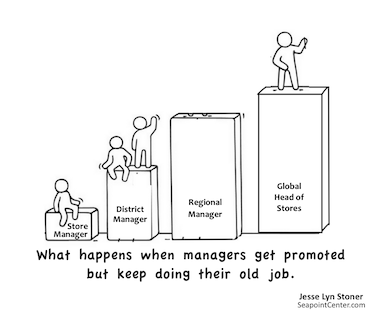 Marissa was frustrated. As district manager of a large retail chain, she was responsible for ten stores. Her district was doing well, meeting sales goals and store operations were generally smooth.

The problem was that her boss, the regional manager, was a micromanager. Every time an issue arose, her boss was right in the mix with his sleeves rolled up. Marissa ended up spending as much time responding to her boss as she did addressing the issue. It was time consuming, and affected her self-confidence and her team’s confidence in her.

My assessment revealed it wasn’t just Marissa who was being micromanaged. Her boss treated all of the district managers the same way. What’s more, almost all the regional managers were micromanagers, basically doing the job of the people who reported to them. They were regional managers in title only.

So who was doing the job of the regional managers? No one. There was a gap and a huge missed opportunity for senior leaders to be thinking strategically about the market and how to grow the business.

Why would someone work hard to be promoted and then keep doing their old job?

But the reasons for being a micromanager are not always personal.

When an issue is pervasive throughout company, it is a mistake to think the issue is simply a matter of personal style.

In this case, the company was primarily operationally focused, and most leaders spent their time immersed in the details of work at the level below them.

Because the regional managers were so busy micromanaging the people who reported to them, they were missing important work they could have been doing as regional managers – thinking together strategically about how to support the company, to consider what was happening in the market place, trends in customer needs, and how they could build their team.

We called this phenomenon being “bunched up on the ladder” – where in reality two levels were doing the work of the same rung, and no one was doing the work of the rung above. To resolve this issue, instead of simply sending the managers to a training program, we instituted a change initiative to “unbunch the ladder,” which involved a four prong approach: