When You’re Thrown Off Course…

Vision: How It's Created Is as Important as What It Says
How the Power of Vision Can Help Your Family & 4 Tips to Create One 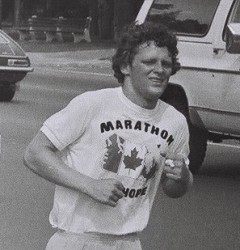 In 1975, Terry Fox, was awarded Athlete of the Year his senior year in his British Columbia, Canada high school.   A few months after graduation, he discovered he had a malignant tumor. His leg was amputated four days later.

During his follow-up treatment, Terry saw suffering as he’d never seen it before. He later wrote these words in a letter to the Canadian Cancer Society requesting their support:

As I went through the sixteen months of the physically and emotionally draining ordeal of chemotherapy, I was rudely awakened by the feelings that surrounded and coursed through the cancer clinic. There were faces with the brave smiles, and the ones who had given up smiling. There were feelings of hopeful denial, and the feelings of despair. . . . Somewhere the hurting must stop . . . and I was determined to take myself to the limit for this cause.

He left the cancer clinic with a vision to run across Canada to raise $1 million to fight cancer. There was a second purpose to his marathon—to demonstrate that there are no limits to what an amputee could do and to change people’s attitudes toward people with disabilities.

At first, Terry kept his vision a secret. He ran in the dark so no one could see him. When he felt confident that he could gain their support, he shared his vision with his family and close friends. Terry trained for fifteen grueling months, until he could run twenty-three miles a day. The only day he took off from training was Christmas, and only then because his mother had asked him to.

On April 12, 1980, he dipped his artificial leg in the Atlantic Ocean in St. John’s, Newfoundland, to begin his run.

Terry ran 3,339 miles from Newfoundland, through six provinces. He was two-thirds of the way home.

His cancer had recurred and had spread to his lungs. He flew home for treatment. And with his family beside him, Terry Fox died on June 28, 1981—one month short of his twenty-third birthday.

He did not complete his Marathon of Hope. But his vision wasn’t to run across Canada. That was his plan to achieve his vision. His vision was to raise $1 million dollars for cancer research and to increase awareness about disabilities. In fact, he raised $23.4 million and people everywhere saw him as an athlete and a hero, not a person with a disability.

The Terry Fox Run continues as a yearly event and has raised millions of dollars. This September will mark the 31st anniversary of the Terry Fox Run.

Terry wasn’t planning on a recurrence of his cancer. It threw him off course, and his plans had to change. But his vision didn’t.

We can all learn a lesson from Terry. You might say, “That’s inspiring and remarkable, but I’m not a “Terry Fox.” That may be true.  But when you are thrown off course by unforeseen events, you have this choice: reconnect with the essence of what’s important,  refocus on your vision, set new goals and continue your journey.

*This story is excerpted from Full Steam Ahead! Unleash the Power of Vision in Your Work and in Your Life by Ken Blanchard and Jesse Lyn Stoner. If you’re from Canada most likely you know the story of Terry Fox. If you would like to know more about Terry and his Marathon of Hope, check out this short ESPN video with actual footage of Terry.

Vision: How It's Created Is as Important as What It Says
How the Power of Vision Can Help Your Family & 4 Tips to Create One