How to Avoid Team Decisions That Plop

Why Should I Hire You?
If Your Vision Is Only About Yourself, You Are Too Narrowly Focused 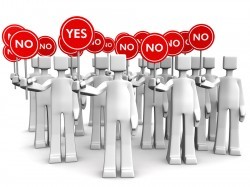 When was the last time you were with a group of people that needed to make a decision, where people tossed out ideas and at least one suggestion was totally ignored? If you’re like most of us, it was probably within the last few weeks, whether in a business meeting or a social setting.

Did you realize that the group actually did make a decision? The decision was “no” – it just wasn’t acknowledged. Teams are constantly making decisions, often without first being clear about how the decision will be made.

When teams are not clear on how their decision will be made, they often don’t make the best decisions.

For instance, we often assume that silence means consent—if you don’t say anything you are in favor of the proposal.  Yet this assumption is frequently wrong.  Have you ever been in a meeting where someone said, “Alright, it’s agreed we will do it” and then after the meeting ended, members shared reservations and questions? Unfortunately, the implementation of these decisions then falls on those who did not support or understand the decision.

Once a team decision is made, it is extremely difficult to undo.

There’s a big pay-off to deciding ahead of time which decision-making method your team will use. Next time your team is facing a decision, consider these six possible decision methods. With the exception of the first method, there is no one best way—there’s an upside and a downside to each.

Why Should I Hire You?
If Your Vision Is Only About Yourself, You Are Too Narrowly Focused