Do team values unite or divide your team? 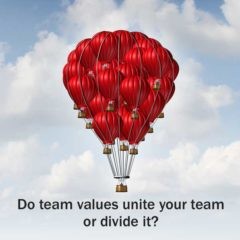 Your team’s ability to work together effectively hinges on trust. And when values are violated, trust disintegrates.

Values are our deeply held beliefs about what is right, and we all have values that guide our choices and actions. either consciously or unconsciously.

We care passionately about our values, and the most contentious misunderstandings occur when we believe our values have been violated.

When team values are not clear, we depend on our personal values to interpret each other’s actions and intent.

Identifying a list of team values is not enough. Sometimes team values unite teams, but they can also divide a team.

Take the story of Latisha and William for example.

It was quite a blow-up. Latisha and William each accused the other of violating one of the team’s core values – integrity. They each felt they had honored the value and the other person had disregarded it. People sure get mad when they feel someone has trampled on their values!

William had promised the client he would send the proposal by the end of the day. It was 4:45 pm and he was waiting for Latisha to finish the final edits on the graphics. Latisha was conscientiously checking every detail for accuracy making sure that each segment of the pie chart was the exact same size.

At 4:55 pm, William walked over to Latisha’s desk and asked her when she’d be ready. She said she needed 15 more minutes. William told her to forget it – that he was going to use the earlier version. He walked back to his desk and sent the proposal at 5:00 pm sharp.

And that’s when the blow-up occurred.

Why did this happen? You might assume it was a personality conflict. That’s a typical conclusion… but it’s the wrong one. People with different personalities can work together quite effectively when they trust they share the same values.

The problem was the team had identified four values, but it was only a list of words – with no definition of what each of these words meant.

Therefore, Latisha and William were forced to use their own personal definitions of what the value “integrity “means.

Latisha’s perspective: Our team values integrity. When I do a job, I do it right. You can count on me to make sure that whatever goes to the client looks professional and is accurate. I’m embarrassed and angry that William violated our value of integrity by sending the proposal with inaccuracies.

William’s perspective: Our team values integrity. When I make a promise, I keep it. I promised the client I would send that proposal by the end of the day. The graphic was not the highest quality, but all the information was accurate and we demonstrated to our client that they can count on us to follow through. Latisha’s expectation that I wait for her was out of line because it violated our team’s value of integrity.

If the team had clearly defined each of their values, William and Latisha’s conversation might have gone like this instead:

William: It’s 4:55 pm and I’ve promised the client I’ll send the proposal by 5:00 pm. It’s important for our team to honor our value of “meeting our commitments to clients.”

Latisha: I’m not done and I don’t want to send it because I’m honoring our team’s value of “highest standards of professionalism.”

William: Looks like we’re struggling with a values conflict.

Latisha: Then we need to determine the most important value in this particular case.

William: The client needs the proposal by the end of today so they have time to review it before presenting it to the executive team. As long as the data is accurate, they’ll have what they need for tonight and we can send them a cleaned up version in the morning with the final graphics.

First, engage in a conversation that clearly defines each of your team values. Then make sure everyone can answer yes to these questions:

Photo credit: Bigstock/Digitalista Do Your Team Values Unite Your Team?