The Gift of Humiliation 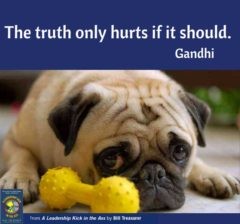 No one likes to feel humiliated. It hurts. And along with hurt usually comes anger. It’s a natural reaction. It’s your ego’s way of protecting itself. You might be angry with the person who caused your humiliation, or your might turn your anger inward toward yourself.

Hurt and anger are a natural first response to humiliation. But if this is your only response, you will lose the opportunity that comes along with it.

Humiliation can be a wake-up call. How you respond to it means the difference between staying stuck in a pattern that is not serving you and experiencing a fundamental shift that changes you for the better. This is the gift of humiliation.

Other times humiliation can come when you are still learning and lack confidence. Recently promoted to a management position, Marcella was asked to speak at the annual meeting. Although she practiced her speech for weeks, she knew it had bombed when everyone avoided her afterward.

Jeff could have gotten defensive and blamed his boss. Marcella could have decided never to speak publicly again.

Instead, they both treated their humiliation as a wake up call. Jeff decided to have a conversation with his team and get their views on how he could be a better boss. Marcella started working with a public speaking coach. They turned things around, and most important, they developed real credibility and humility.

To reap the gift of humiliation, you need to acknowledge your part in what happened, make amends if they are called for, and then focus your energies on the learning opportunity that has been given to you.

I recently had a chance to catch up with my good friend Bill Treasurer about his new book A Leadership Kick in the Ass. Bill talks about “transformational humiliation,” the kind of humiliation that creates a deep shift in how you see the world, others and yourself.

Bill says that the greatest leadership lessons often come in the form of a startling jolt. The great thing about a sudden jolt is it catches you off guard. In the moments you are startled, before hurt, anger, and blame settle in, there is an opportunity for a huge “ah-ha.” This is your transformative opportunity.

It gets your attention, shines a light on your shadows, and motivates you to do something different.

For some people it takes a personal tragedy to get the jolt. For others, the shock of not achieving a goal you thought you deserved. Or tough feedback, like Jeff and Marcella got.

The fall from on-high might be painful, but if you develop humility when you land, it is well worth it.

So the next time you get a startling jolt, remember that the only thing that is really hurt is your ego, a rigid defense structure that keeps bad (and good) feelings out and maintains the status quo.

The truth only hurts if it should. – Gandhi

The pain is your gift. Unwrap it and become the leader you were meant to be. 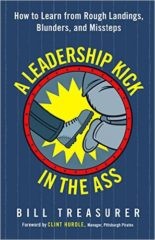 This post was written in honor of Bill Treasurer’s wonderful new book, A Leadership Kick in the Ass. Learn more about transformative humiliation, the kinds of kicks you are likely to receive and how to benefit from them, and how to kick your own butt so you can keep your ego in check. Not only is this an easy, fun read, but Bill provides practical, actionable tips you can use immediately. Guaranteed to be one of the most helpful books you read this year, I expect you’ll recognize a few people you’ll want to pass it along to who would benefit from a kick or two themselves.