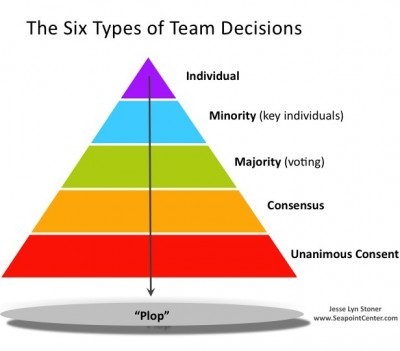 There are six ways teams can make decisions. Some people believe that in a collaborative environment, consensus is the best. But that’s a big mistake.

Pushing for consensus when it’s not needed actually makes collaboration more difficult. The best collaborative environments are situational in their approach to team decision-making.

You make countless decisions every day. Knowing when and how you need to involve others, and the best team decision-making method for each situation, will help you make the right decisions, will make implementation easier and will save time in the long run.

The Six Types of Team Decisions

Individual. The individual who is responsible for the outcome makes the decision. If your office is running low on pens, the office manager can decide what kind to buy and place the order. It would be a waste of time to consult with others. But this method doesn’t work if you make a decision that impacts others without discussing it with them first. Often the repairs needed cost more time than it would have to simply involve them at the front end.

Minority. A subgroup of the team makes the decision, either as a group or in individual consultation with the team leader. This method makes sense when different people have the information needed to make an intelligent decision. This method does not work when a subgroup forms and “railroads” a decision that others on the team do not support.

Majority. Majority rule is usually obtained by voting or polling.  Majority rule is often assumed to be appropriate for all team situations because it reflects democratic political systems.  However, it does not ensure the decision will be supported and smoothly implemented. This method works best with larger groups.  In smaller groups, if you do resort to voting, it is often best to set the majority at 75% or greater, rather than using a simple majority.

Consensus. One of the most effective but also time-consuming methods of team decision-making is to seek consensus.  Consensus is where every member of the team can say, “I believe everyone understands my initial point of view.  I clearly understand the viewpoint of the decision we have made and am prepared to support it, even if it doesn’t reflect my original view.”  Consensus takes longer to achieve, but implementation is faster because the decision is understood and supported by all. A caveat: don’t assume that silence means agreement. Make sure you have true consensus and not just lip-service.

Unanimous Consent. This is where everyone truly agrees on the course of action. It’s easiest for simple decisions like, “should we break for lunch right now?” or urgent decisions like “I see smoke. Let’s get out of the building.” For complex, important decisions, this is the least attainable kind of decision. Consensus is usually enough, as long as it is real consensus.

“Plop.” This is always an ineffective method of decision-making which is why it is not part of the diagram. It is decision by lack of decision. Someone suggests an idea, no one responds and the conversation moves on. The idea just plopped. Actually a decision was made – the answer was “no” – but it was not acknowledged as a decision. The person who made the suggestion often also feels unacknowledged, which may affect their willingness to offer more ideas in the future. 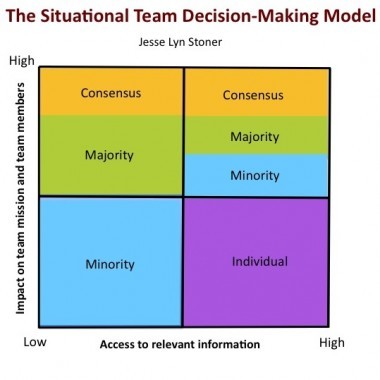 Before you make a team decision, first determine how that decision will be made – which decision-making method will be used. To select the best method, answer these questions:

2. How great is the impact of the decision on accomplishing the team’s mission and how much does it impact the team members?

If you have all the information you need, the decision is not mission critical and does not impact others, go ahead and make the decision yourself. Don’t waste people’s time.

However, if successful implementation is important and is dependent on others, it is to your advantage to involve them in the decision early on. Otherwise, you are in danger of making what might look like a smart decision, but fails during implementation because of lack of understanding and support from those who need to implement it.

The more others are affected by the decision, the more they should be involved in making it. As the impact increases, the type of decision-making method needed increases in the level of involvement. A high impact decision requires consensus, even when you think you already know what the right decision is.

A good consensus process, where team members set their egos and personal needs aside and focus on the mission, will result in a higher quality decision. And as a result of the process, team members will develop a deeper understanding of the issues and great commitment to the decision, ensuring smoother and faster implementation. Unanimous consent, although a delightful surprise when it occurs, is not included in this model because the power of working through a real consensus process will generate the understanding and support needed.

What if you don’t have time for involvement? Shouldn’t that be a variable? Indeed, if the building is on fire and smoke is coming under the door, it doesn’t make sense to call a group together to discuss options. However, most situations are not as urgent as they seem.

We have all had the experience of being in a hurry and making a decision we later regret. The same thing can happen with teams. It’s important to be aware of the potential for bad decisions when under an intense deadline, and consider the short-term benefit of a quick decision vs. the long-term consequences of poor implementation and needing to redo work.

What Your Team Needs to Know

When you ask for input, be clear about what decision-making method is being used and what their actual influence in the decision is. Are they being asked to consult or do they have a real vote?

When people know ahead of time what their role is in the decision-making process, they are less likely to resent a decision that doesn’t go the way they wanted.