Vision and Execution Are Not Sequential
Situational Team Decision-Making: Collaboration Does Not Require Consensus 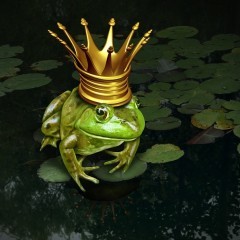 Did you ever get feedback that your behavior was having a negative impact on others? Perhaps you were told you’re too critical… or don’t listen enough… or are micro-managing your team… or even the other end – that you’re not involved enough?

Have you ever worked hard to change that behavior, perhaps even worked with a coach, but then got feedback that they still saw you as a frog… not the prince or princess you thought you had become?

If so, you’ve not alone. One of the most common reasons people revert to old behavior patterns is because of lack of appreciation of their efforts, lack of acknowledgement they’ve changed, and lack of support to continue acting differently.

In part the answer lies in physics. Newton’s Third Law to be exact. “For every action, there is an equal and opposite reaction.”  The more you try to change, the more the rest of the system pushes back to keep things the same. Often your actions serve a purpose that no one is consciously aware of. For example, although your team might complain about being micro-managed, they are also spared the stress of juggling priorities and managing team deadlines.

People continue to see what they expect to see.  In other words, sometimes they just don’t notice you’ve changed your behavior. We are creatures of habit and fall into patterns of perception as well as patterns of behavior. It also might be that your new behaviors are tentative or awkward. After all, if you were skillful at it, you’d probably have been doing it all along.

People don’t trust that you’ve really changed. If you’ve acted a certain way for a long time, people might not trust that you’ll continue in this new way. They think you’ll revert to your old behaviors. And quite possibly they’ll be right. Not because you don’t have good intentions, but because new behaviors need to be supported and nurtured as your skills grow.

What you can do to make your changes stick.

Before you decide it’s not worth the effort and slip back into your old patterns, here are five things you can do to get the recognition and support you need to make change stick.

Vision and Execution Are Not Sequential
Situational Team Decision-Making: Collaboration Does Not Require Consensus