An Interview with Jake Jacobs on Real Time Strategic Change

Tune In and Turn Off
What I Learned about Vision Casting 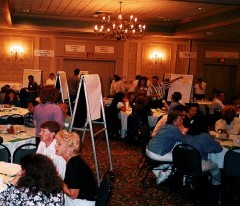 I was delighted to catch up with Jake Jacobs, the creator of Real Time Strategic Change (RTSC), the approach that brings hundreds of people together to make collaborative decisions about their organization in real time, which I described in Try Collaborative Change for a Change.

I had an opportunity to ask Jake about how change has changed since he first developed RTSC.

Jesse: Jake, you wrote the first edition of your groundbreaking book Real Time Strategic Change twenty years ago. I’ve used RTSC many times over the years and am always impressed with what happens when you bring a large slice of an organization together to discuss issues and make decisions instead of putting them in an auditorium to be talked at by the corporate execs.

Jake: It was a 1,000 person meeting held on the floor of the New Orleans Superdome. All employees of the oil company attended except for 200 that needed to staff skeletal crews on the oil platforms in the Gulf of Mexico. RTSC is about making real changes in real time. This meeting resulted in a new business direction that added $250MM to the bottom line of a $750MM business within 18 months.

Jesse: Impressive! And how has RTSC evolved over the years to deal with organizations with complex structures and where the people must connect virtually from all parts of the globe?

Jake: RTSC is about creating fast, far-reaching, and sustainable change. I’ve been looking at how the principles can be applied to coaching leaders and improving team performance to achieve whole systems change.

One of the RTSC principles is about planning for the future while living it at the same time. That’s what “real time” is about. We are continually looking for ways to shorten the cycle time between planning and implementation – the shorter that cycle time the faster change occurs and the more likely it is to stick.

For the last six months, I’ve been coaching the owner of a media company and working with some of the teams helping them implement the RTSC principles. Now when they make a decision, some aspect of it is implemented immediately.

Also, because they now hold a “whole systems” perspective, they created a cross-functional team to deal with issues that had previously been a source of frustration because of lack of collaboration among the sales, edit and production staff. During their first meeting they realized they had not included a key person, so they stopped the meeting, went out and found him, and invited him to join.

Jesse:  What would you tell leaders or consultants who are involved in change or who are thinking about it?

Jake: First, pause and take the time to get clear about your preferred future – this holds for any work you are doing.

Second, RTSC is about what happens in daily work. it doesn’t have to be tied to a major transformation effort. Sometimes what we consider small, largely unimportant actions have great meaning. Every win gives you the time money, energy and political capital to achieve your next round of investments.

Early wins are not always the easiest wins. They’re the wins that matter the most that you need to achieve quickly. These deliverables increase the “believability index” for people. Consider what results will grab people’s attention? Be strategic. Make changes today that matter the most for the organization tomorrow.

RTSC, at its core, is about accelerating and sustaining better ways of translating strategy into better, more aligned ways of doing daily work.

Tune In and Turn Off
What I Learned about Vision Casting