Could You Be Off Course Without Knowing It? 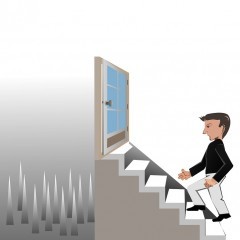 You’re clear about where you want to go. You made your plans. You’ve started on your journey.

Maybe you landed your dream job, or found your soulmate, or have a vision for how you can make a difference in the world.

So now, you simply need to focus on execution – on implementing your plans. Right?

Sadly, it’s not uncommon that at some point in the future, you might take stock and wonder how you ended up where you are.

Why does that happen? How is it possible to be off course without knowing it?

A sudden change in your world can derail you, not just temporarily, but for long after the crisis is over.

Anthony had just started his own business when his wife was diagnosed with cancer.  Realizing he needed to be able to devote more attention to take care of his wife and children during this period, he put his new business on hold and return to his previous job.

Years later, long after his wife had returned to full health, he was still with the same company. The momentum of life had propelled him forward and had replaced his original dreams.

Team drift occurs when a formerly high-performing team loses its focus and capabilities without team members recognizing what is happening. There’s also leadership drift, and drift can occur in your personal life as well.

What happens is you start out with clarity, but stop paying attention and being intentional about your choices and let momentum take over. Drift occurs as a result of a series of small things, each insignificant on its own, the total of which has a cumulative impact.

Sometimes you know you’re off course, but it’s only a little bit so you don’t do anything about it.

The longer Barbara worked for her company, the more aware she became of policies that made her uncomfortable.  First she discovered they collected information on customers without their knowledge, and she rationalized it.  Then she discovered a few more things about the way the treated customers, and again rationalized it.  After a few years, she realized the entire atmosphere in the company was oppressive.

It had happened so gradually, she had not recognized she was in hot water – the same way you boil frogs.  If you put a frog in a pot of hot water, it will jump out. But if you put it in a pot of cold water and turn on the heat, the water warms up so gradually that the frog just goes to sleep and doesn’t notice that the water is getting hotter and hotter.

4. Never had a sense of direction.

Sometimes you can find you’re off course because you never had a clear course in the first place.  You just wake up one day feeling like things aren’t right and have no idea why.

How To Make Sure You Stay On Course

1. Stay conscious, aware of your environment, and intentional about your choices. Stay present. Don’t “go to sleep” on yourself.

2. Be clear about your vision and values.

3. Be ready to readjust. Priorities can change, due to a shift in your environment or within yourself, so revisit them regularly and realign your actions when needed.

4. Stay focused on your vision. When you are deeply connected to a vision, the closer you come to it, the more clear it will become. You will see aspects you had not realized earlier and new opportunities to act on it.

5. Balance both execution AND your vision.
Remember, “Vision without action is a daydream. Action without vision is a nightmare.” – Japanese proverb