Create an Unbalancing Force If You Want To Move an Elephant
Are You Ready for Your "Second Act"? 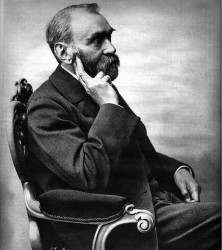 Alfred came from a long line of Swedish scientists, engineers and inventors. He learned the principles of explosives at a young age from his father who owned a machine tool and weapons factory in Russia in the mid 19th century. He studied chemistry in Paris and the United States and filed his first patent for a gas meter at the age of 24.  At the age of 34, Alfred invented dynamite.

By the time he was 55 in 1888, Alfred had been issued over 350 patents internationally, owned 90 armaments factories in over 20 countries and had amassed a great fortune. Although he owned a home in Paris, he was constantly traveling, unmarried, and according to Victor Hugo was “Europe’s richest vagabond.”

1888 was a significant year for Alfred.  His older brother Ludwig had just died.  When Alfred opened the newspaper, he was startled to read his own obituary instead of Ludwig’s. The Paris newspaper had confused the two brothers.

Worse yet, the headline ran: “Le marchand de la mort est mort”  – “The merchant of death is dead.” The article went on to say that Alfred had “made his fortune by finding ways to kill more people faster than ever before.”

That would give anyone pause for reflection! And Alfred had 8 more years to reflect on this before his real death in 1896 … 8 years to do something about it. He made a big decision, and his actions changed the impact of his life and how he would be remembered.

How do you want to be remembered?

What do you want people to say about you after you’re gone?

Most of us are not given the gift of reading our own obituary prematurely. However, you can write your obituary by the way you live your life now.

You will not be remembered for what you owned, the clothes you wore, what kind of car you drove, or how fancy your home was.  No one ever put on their tombstone how much time they spent at work.

You will be remembered for the effect you had on others and the contribution you made to the world – either positive or negative.

Are you living the life you want to be remembered for?

Do you have a vision for the life you want? One way to create a vision is to write your own obituary.  As morbid as it might sound, there is something powerful about actually writing it out, and not just thinking about it.

If you decide to give it a try, here are some questions to consider:

Most importantly, for each answer you come up with, ask yourself. “Why do I want that?” — Keep asking why until you get down to what is most fundamentally important to you.

The most difficult and important step in a creating a meaningful vision for who you want to be is to discover what you really desire.

Create an Unbalancing Force If You Want To Move an Elephant
Are You Ready for Your "Second Act"?