What If You Changed and No One Noticed?
Let's Harness the Power of Social Media to Help Dan Rockwell 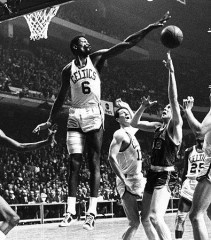 Have you ever been part of a team that magically came together? -where everyone thoroughly enjoyed being part of the team, worked together in synchronicity, and where you were really proud of what you accomplished?

Over the years when I ask this question, I hear people share their experiences in all kinds of settings: work, community, sports, religious, high school, and once even a “gang” of school-age kids who built a tree house.

When I then ask what were the most important conditions that contributed to the success of the team, I invariably hear “shared goal” or “common vision.”

In his book Second Wind, Bill Russell describes his powerful experience as a member of that kind of team – the Boston Celtics during the “dynasty years” (1957-69). Under the leadership of Red Auerbach, the Celtics collected 11 NBA titles in 13 seasons. Their streak of eight consecutive NBA championships is the longest streak in U.S. professional sports history.

Every so often a Celtics game would heat up so that it became more than a physical or even mental game, and would be magical. That feeling is difficult to describe, and I certainly never talked about it when I was playing. When it happened, I could feel my play rise to a new level. It came rarely, and would last from five minutes to a whole quarter or more. Three or four plays were not enough to get it going. It would surround not only me and the other Celtics, but also the players on the other team, and even the referees.

At that special level, all sorts of odd things happened. The game would be in a white heat of competition, and yet somehow I wouldn’t feel competitive–which is a miracle in itself. It’d be putting out the maximum effort, straining, coughing up parts of my lungs as we ran, and yet I never felt the pain. The game would move so quickly that every fake, cut, and pass would be surprising, and yet nothing could surprise me. It was almost as if we were playing in slow motion. During those spells, I could almost sense how the next play would develop and where the next shot would be taken. Even before the other team brought the ball in bounds, I could feel it so keenly that I wanted to shout to my teammates, “It’s coming there!” –except that I knew everything would change if I did. My premonitions would be consistently correct, and I always felt then that I not only knew all the Celtics by heart, but also all the opposing players, and that they all knew me. There have been many times in my career when I felt moved or joyful, but these were the moments when I had chills pulsing up and down my spine.

Sometimes the feeling would last all the way to the end of the game, and when that happened I never cared who won. I can honestly say that those few times were the only ones when I did not care. I don’t mean that I was a good sport about it–that I’d played my best and had nothing to be ashamed of. On the five or ten occasions when the game ended at that special level, I literally did not care who had won. If we lost, I’d still be as free and high as a sky hawk.

What is it about vision that creates such a magical experience? Here are 8 ways vision unleashes the full potential and brilliance of a team.

1. Unleashes energy
When a vision stems from the innermost values and beliefs of the people, it generates a tremendous excitement, a compelling spirit, and a powerful level of engagement.

2. Kindles Commitment
Seeing a strong relationship between the team’s vision and what they personally believe in and care deeply about kindles a passionate commitment.

3. Provides Perspective
A vision illuminates the team’s purpose so that all members are completely clear about what they are doing, why they are doing it, and how their work relates to what they personally believe in. Members see themselves as part of a larger whole and they see where they fit in. Day-to-day activities have more meaning because it is clear how they contribute to the greater welfare of the team.

4. Supports Empowerment
When leaders are assured that shared direction and values drive employee decisions, they are more willing to let go of control and let others assume responsibility. Leaders spend less time managing others and day-to-day crises and more time focusing on planning and big picture issues.

5. Sparks Creativity
Creativity flourishes because there is more room for autonomy within the broad guidelines that a shared vision provides. Because everyone knows they each desire the same result and share the same values, they can act more independently without concern for competing self-interest.

6. Triggers Trust
People work together more easily. Because they realize they are not so different from each other, they begin to trust each other’s unique contributions. The organization becomes a partnership, where each person has something to contribute in his or her own way.

7. Stimulates Creative Disagreement
People can argue about ideas without fear of it leading to damaging personality conflicts and without fear of ridicule and exclusion.

8. Encourages Proactive Action
Instead of passively waiting for direction, people at all levels take proactive action because they share truly responsibility for their team’s future.

What could your team accomplish if you had a shared vision?

What If You Changed and No One Noticed?
Let's Harness the Power of Social Media to Help Dan Rockwell