Do you serve your team or are you a self-serving team member?

Leadership Love is a Competitive Advantage
The Biggest Leap You’ll Ever Make: From Team Member to First-Time Manager 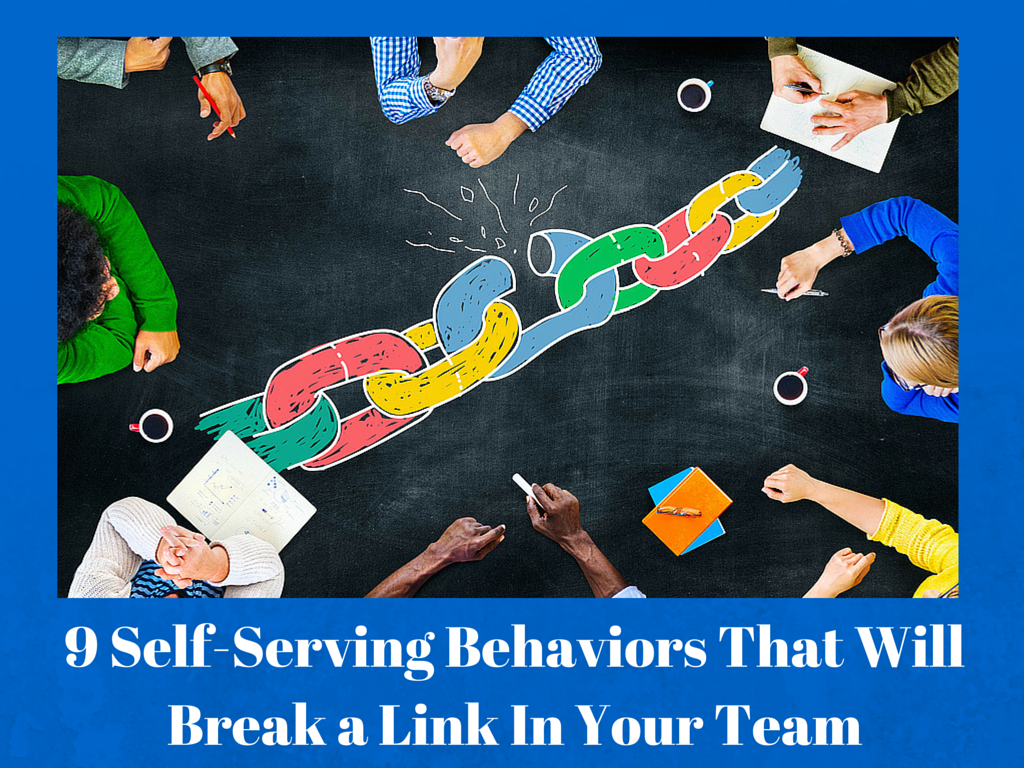 Marcia confided, “I avoid the team meetings whenever I can. They take way too long and drive me crazy. There are a couple of guys who go on and on about stuff that doesn’t matter.”

They might think they’re showing how clever they are, but they’re really showing they care more about themselves than about the team.

They are weak links and might not even realize it.

Could you be the cause of a broken link not know it?

We all engage in self-serving behaviors occasionally. After all, we’re only human.  BUT if you are consistently focused on yourself instead of your team, it’s time to take a hard look in the mirror.

You can’t count on your boss or one of your teammates to let you know. Often people will complain behind your back, but are afraid to confront what’s going on.

Take responsibility for your own behavior and examine your motives before you speak. Are you more focused on yourself than on what’s in the best interest of your team? Look at your behavior. Do you consistently engage in any of these self-serving team behaviors?

1. Criticizing or blaming: It is important to review mistakes in order to learn from them. But blaming others or putting people down does not lead to team learning.

2. Subgrouping: When you see yourself as part a subgroup that is “better” than others on the team, you divide the team into an “us” and “them.”

3.  Detouring: When you go off on a tangent or go on at length about personal experiences unrelated to the problem, you take your team off course.

4.  Blocking: When you arguing too much on a point or reject ideas without consideration, you block the team from moving forward.

5.  Competing: Good-natured competition can be a fun way of advancing the team. But those who are vying with others to produce the best idea, to talk the most, to play the most roles, or to gain favor with the leader are focused on advancing themselves.

6.  Horsing Around: A well-timed joke or good-natured comment can reduce tension. But too much clowning and joking is disruptive to the work of the team.

7.  Monopolizing: Are you aware of how much you talk compared to others? Do you solicit other’s ideas? Do you push your own agenda or pet projects without considering others?

8.  Unprepared: A pattern of coming to meetings unprepared, without having read materials that were sent ahead of time, arriving late or leaving early is a passive way of showing your team you don’t care.

9.  Withdrawing: You might think that sitting quietly and not calling attention to yourself is not a problem, but being uninvolved, acting indifferent, daydreaming, or holding side conversations hinders team cohesion and deprives the team of your contribution.

If you’re not happy with the way your team is working, instead of engaging in these self-serving behaviors, serve your team by non-judgmentally putting your concerns on the table.

If one of your team members consistently engages in self-serving team member behaviors, it’s difficult to work around it. Most of us are guilty of some of these at one point or another. Everyone has a bad day sometimes. But ignoring an ongoing pattern of these behaviors will eventually torpedo the effectiveness of your team.

Leadership Love is a Competitive Advantage
The Biggest Leap You’ll Ever Make: From Team Member to First-Time Manager