Create an Unbalancing Force If You Want To Move an Elephant 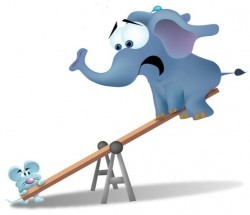 Chris is unhappy at work. He thinks the work is boring, and he doesn’t like his boss or co-workers.

Why doesn’t he quit?

The answer lies in Newton’s First Law: An object continues to do whatever it happens to be doing and resists change unless an unbalancing force is exerted upon it.

An Unbalancing Force is needed to overcome resistance to change. The amount of Chris’s unhappiness is not great enough to unbalance him.  And no strong vision of an attractive alternative entices him to move.

An Unbalancing Force might occur if something big were to happen, such as if Chris were passed over for a promotion he had been expecting. Or he might quit one day if enough minor things built up until they were intolerable.  But in that case, Chris will only have moved from one difficult situation to another.

When you focus only on what is wrong with your current situation, you can become miserable, with your feet stuck in the mud.

There is nowhere to go unless you also have a believable, compelling vision of a where you want to go.

Vision alone is not necessarily an Unbalancing Force.

How many people have dreams that they never put into action because they are not grounded in reality?

When you only focus on your vision without an accurate assessment of your current reality, you can become unrealistic, with your head stuck in the clouds.

An Unbalancing Force occurs when enough tension is generated between the realization that the current situation is no longer tenable and a belief in the possibility of a more desirable place to move toward.

The Newton’s First Law holds true for organizations as well as individuals.

Organizations are like elephants. The bigger they are, the harder they are to move. However, no matter what size your elephant is – whether you are the leader of a team, a division or an entire organization- the same principle applies. To create an Unbalancing Force, you need to do both:

1. Describe the unvarnished truth of the current situation. To be credible, you must articulate a truth that people already sense or that is verifiable. Creating a false sense of urgency will backfire as people will lose trust in your leadership.

2. Help people envision an attractive future that resonates with their hopes and dreams and which they believe is possible.

When you hold the images of both your present situation and your desired future, creative tension is generated. Another law of nature is “tension seeks resolution.” It feels uncomfortable, but it is the creative force that drives the movement in the direction of your vision.

Martin Luther King, Jr.’s  “I Have a Dream” speech is often used as an example of a compelling vision. It is actually a beautiful example of an Unbalancing Force.  He paints powerful pictures that go back and forth between the “truth of the present realities” (in red) and “vivid pictures of a desirable future” (in blue).