The Power of Picture: 7 Tips to Create Your Picture
When Leaders Don't Lead 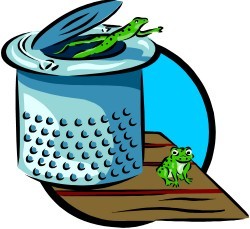 Did you ever wake up, look in the mirror and ask yourself, “How did I get off-track?”

My client Sam, head of buying for a large retail company, recently confided to me, “I’m working way too hard and spending too much time doing things I don’t enjoy.  When I first started out, buying was a lot of fun. You’d think that now, after all these promotions and recognition, as a senior leader, I’d feel pretty satisfied.  The truth is, what I’m doing now, doesn’t line up with how I want to be living my life.  And frankly I don’t know how I got here.”

Sam deserves a lot of credit for admitting this.  It takes courage to consider the relationship between your hopes and dreams and your reality, because you might have to do something about it.

With all the best intentions, we start down a path, thinking we know where we’re going, and at some point look around and realize we don’t know where we are.

Why do we get off track?

Sometimes we are thrown off track because of a sudden change in our world such as an earthquake, hurricane or an illness.

My colleague Anthony had just started his own business when his wife was diagnosed with cancer.  Realizing he needed to be able to devote more attention to take care of his wife and children during this period, he put his new business on hold and return to his previous job.  Years later, long after his wife had returned to full health, he was still with the same company. The momentum of life had propelled him forward and had replaced his original dreams.

Sometimes you know you’re off course, but it’s only a little bit so you ignore it.

The longer my friend Barbara worked for her company, the more aware she became of policies that made her uncomfortable.  First she discovered they collected information on customers without their knowledge, and she rationalized it.  Then she discovered a few more things about the way the treated customers, and again rationalized it.  After a few years, she realized the entire atmosphere in the company was oppressive.

It had happened so gradually, she had not recognized she was in hot water – the same way you boil frogs.  If you put a frog in a pot of hot water, it will jump out. But if you put it in a pot of cold water and turn on the heat, the water warms up so gradually that the frog just goes to sleep and doesn’t notice that the water is getting hotter and hotter.

Sometimes we start out with clarity and then a certain momentum takes over and we just stop paying attention.  We stop being intentional about our choices.  When that happens, we have actually turned the reins over to someone else because we have lost our connection with our own desires.

Never had a sense of direction

Sometimes we find we’re off course because we never had a clear course in the first place.  We just wake up one day feeling like things aren’t right and have no idea why.

How do you know the water’s heating up? How far off course we get is often determined by how quickly we recognize we’re off.

It would be helpful if we could determine the early warning signs so we could get back on track more quickly.

What do you think they are?

I’d love to hear what you think.

The Power of Picture: 7 Tips to Create Your Picture
When Leaders Don't Lead