Help Your Team Get Unstuck: Ask What Business Are You Really In?
Boiled Frogs and Dreams 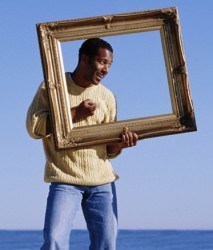 These are not simply encouraging words.  Disney knew that when you create a picture in your mind, tremendous power is released.

My first experience with the “power of picture” took place in a fifth grade classroom when I taught reading to children with learning disabilities. One day it occurred to me that the children had experienced so many years of failure, they probably couldn’t imagine themselves reading a book.

I first became aware of the power of picture after the 1976 Olympics when the USSR stunned the world by walking away with most of the gold medals. The soviets had discovered that when competitive skiers supplemented their practice through visualization, not only were they better prepared to ski in a variety of conditions, but their motivation and self-confidence also increased.

Something you can actually see in your imagination. .

A picture is more specific than positive thinking.  Don’t just think about being great; imagine what great looks like. Create a picture in your mind – close your eyes and see it actually happening.

Create a picture of the end-result, not the process to get there

Originally, sports training used the technique of “mental rehearsal,’” where the athlete visualized his or her performance during the competition. Over the years, sports trainers discovered that the real power was in visualizing the end result— celebrating the victory or seeing yourself standing on the podium receiving the gold medal.

The power is in creating an image of the end result. The process for achieving it, the path, will not necessarily be clear.

Focus on what you desire, not what you want to get rid of

There is more power in proactively focusing on what you desire than reactively on removing a problem. While you might remove a specific problem, you are likely to move from one crisis to another because you’re not focused on where you’re going.

If necessary, pair a removal focus with a creative one.  For example, if you want to lose weight, you need to eat less. However, if you frequently think about the chocolate you are not eating, it’s difficult to maintain motivation over the long term.  Try picturing what you’ll look like in your new jeans instead.

Help Your Team Get Unstuck: Ask What Business Are You Really In?
Boiled Frogs and Dreams