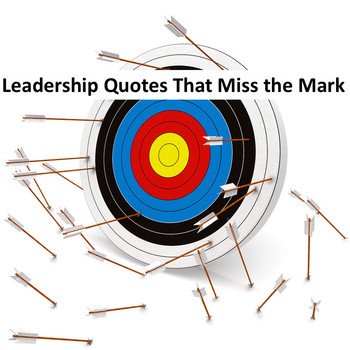 Great leadership quotes inspire and guide us. They become part of our mainstream language and instilled in our culture. We accept them as a reflection of the ideal, aspire to live them and use them when teaching others about leadership.

But sometimes a quote takes root that sends us in the wrong direction. Frequently these are from highly respected leaders who are often quoted. Not bothering to think critically, we just assume everything they say is on target.

Or it might be that the quote is pithy, and we like the way it sounds. The problem with a catchy slogan is that the form supersedes content.

“Lead me, follow me, or get out of my way.” ~ General George Patton

This might make sense in the heat of battle, but fails as a general leadership principle. Leadership is not about bulldozing. It requires engaging people and building understanding.

There is a nugget of truth in this statement – if you’re not leading or following, then you’re either standing still or going in circles. But telling people to move or get out of the way is not the way to mobilize them.

“Leadership is the art of getting someone else to do something you want done because he wants to do it.” ~ General Dwight Eisenhower

“Leadership is getting people to work for you when they are not obligated.” ~ Fred Smith

“Leadership is solving problems. The day soldiers stop bringing you their problems is the day you have stopped leading them.” ~ Colin Powell

Your focus as a leader should be strategic, not tactical. When your primary focus is on solving problems that people bring to you, you keep them dependent on you. Help them learn to solve problems on their own and only elevate the strategic ones, or your time will be consumed with fighting fires, and you won’t have time to lead them anywhere.

This is an example of a catchy slogan that lacks substance. The truth is leaders can’t figure all this out on their own, and we need to stop perpetuating that myth.

There are several problems here. First, as Wally Bock points out, “how can you know the characteristics of ‘the right people’ until you know where you’re going?” Another significant problem is promoting the idea that leaders should focus on bringing in new talent and pruning those who aren’t performing. Leaders should focus on development and do everything they can to develop the team they have into high performers before they think about replacing them.

Finally, the bus analogy is way off-base. Buses have only one driver and everyone else is a passenger. Organizations don’t need passengers. Leaders need to help their team develop the skills to drive their own vehicles and create a shared vision to ensure they are all driving in the same direction.

“Keep your fears to yourself, but share your courage with others.” ~ Robert Louis Stevenson

The attitude that leaders should hide their concerns is erroneous. Research shows that when leaders share their feelings, it actually increases trust. According to Bill George, people want to be led by someone “real.” At issue is not whether to show your concerns, but how you do it. If you use emotional intelligence, you can authentically share your fears and become a stronger leader.

“My job is not to be easy on people. My job is to make them better.” ~ Steve Jobs

This might make sense if you are a parent, but “tough love” and leadership are a dangerous combination. If leaders think of themselves as parents, their team will act like dependent children, not responsible adults. It’s not your job to be easy or tough on people or to grow them up.

The second part of this statement is true – it IS your job to make them better. But how you do that has nothing to do with being tough or easy. You do that by enabling them to do their job – clarifying direction and priorities, supporting their development, providing resources and removing barriers. (p.s. Avoid the temptation to misuse this quote as an excuse for rude behavior.)

“In the simplest terms, a leader is one who knows where he wants to go, and gets up and goes.” ~ John Erskine

If you follow this advice, you should at least look over your shoulder every once in awhile. “If you think you’re leading and no one is following you, then you’re only taking a walk.” ~ Afghan proverb

Some Leadership Quotes That Hit the Mark

If you’d like to check out some pithy leadership quotes that work, here are my favorites: The 40 Best Leadership Quotes.