The Space Between Supervising Closely and Delegating

Introverts: 6 Ways to Maximize Your Natural Strengths
Go For the Gold! 8 Tips to Create The Future You Desire 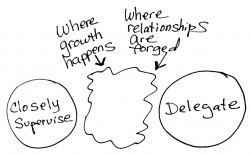 And most of us know what Delegating looks like:

If you want to be an effective leader, you need to be able to hang out in the space in the middle.

It doesn’t work when you try to jump over that space.

When you jump from Closely Supervising to Delegating.

Nancy decided to delegate her calendar to her new assistant. Her assistant took over scheduling like any other activity – she efficiently fit names in open slots. The problem was that friends who wanted a “let’s touch base” call were treated like clients and given “appointments.” (which they didn’t appreciate). And some clients were annoyed because they were used to a personal touch and felt distanced.

When you jump from Delegating to Closely Supervising.

After numerous complains by clients and friends, Nancy told her assistant to check with her before scheduling. Later she was surprised to overhear her assistant complaining that she was too controlling. Once someone has been given responsibility for something, it’s hard to take it back.

The space between Supervising Closely and Delegating is where growth occurs and where relationships are forged.

It’s an interactive space. It’s about both of you, not just the task at hand.

What you do in this space:

As a leader, where do you spend most of your time? If you really want to know, ask your direct reports. You might be surprised at what they have to say.

When should you stop hanging out in the middle and move to Delegating? – When they have demonstrated they are fully competent and confident to do the work independently. Just as Nancy found out, you’re not doing anyone a favor by delegating too soon.

The Difference Between Delegating and Abdicating

When you abdicate, you disappear.

When you delegate, you stay aware of:

When you delegate, your job is to make it easy for them to do their job. The kinds of things you do are:

Introverts: 6 Ways to Maximize Your Natural Strengths
Go For the Gold! 8 Tips to Create The Future You Desire