A Mosaic of Musings on Vision and Leadership
I Think We Have a Vision. It Must Be Around Here Somewhere. 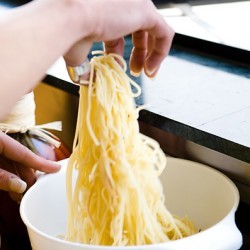 Many years ago while working with the officers of a successful Fortune 500 company, during a break in a strategy session, Dan, the president requested of me half-jokingly, “no more ‘p’ words, Jesse.”

I had never heard that term before.  “What are ‘p’ words?” I asked.

“You know,” he replied with exasperation, “words like paradigm, perspective and process.”

Laughing, I quipped, “What about people? That’s a ‘p’ word. Can we talk about them?”

At one time or another, many of us have felt like Dan – that it would be so much easier to do the work if you didn’t have to plan for the people – to just decide where you’re going and get on with it.

Did you ever feel like you’re pushing a wet noodle?

The problem is, that unless you’re the parent of a two-year old, you can’t just announce where you’re going and expect someone to just do it. People need to “get it” and “buy into it” or they’re not likely to “do it.”

When people understand and agree with your logic and it resonates with their own goals and values, they move forward on their own volition.  But it doesn’t happen just because you want it to.

You need to think through the right process to pull people in.

The process could be simply a clear communication that demonstrates the logic and taps into people’s hopes and desires.  Timing is important. When Louis Gertsner, Jr. finally announced his vision for IBM in 1995, everyone was more than ready. He had earned their trust by stopping the financial hemorrhaging and saving the company from being broken up. In his communication, he showed  where he wanted to take the company and it was quickly embraced.

However, an announcement often does not work, as Jamie Houghton found out when he had to go back to the drawing board after his initial attempt to rescue Corning in 2002.

I recommend using these principles to guide your thinking as you determine the best process to implement your plans.

The lesson of Alice and the caterpillar: If you don’t know where you’re going, it doesn’t  matter what path you take.

The first question to be answered is “where are you going?”  When people focus on the path, reacting to immediate concerns, without a clear sense of where they want to go, they are likely to end up going in circles.  They remain in a reactive mode, responding to the most pressing emergency.  In organizations where people share a common vision, daily activities have meaning and people are able to make decisions based on where they want to be in the future.

The lesson of the Tortoise and the Hare: Sometimes you have to go slow in order to go fast.

By taking the time upfront, you can speed up the implementation.  If we don’t take that time at the beginning, we often have to go back and redo things because we left something important out (like getting people on board).  There will always be a dynamic tension between the “just do it” crowd and those who want more time to think things through.  These two groups need each other.

The lesson of Stone Soup: People are a key ingredient to business results.

The lesson of the AAA triptic: The journey is as important as the destination.

You may have made the right decision, but if others involved don’t feel good about the means used to arrive at it, it may never be implemented.  If people feel their concerns are unheard or not valued, they are unlikely to fully support any decision, even when it’s a perfectly good solution.  The process by which decisions are made influences the quality of the decisions as well as the likelihood of support.  The journey creates the opportunity for the necessary dialogue that results in common understanding, appreciation and commitment.  It is important to pay attention to the process along the way.

The lesson of the Little Red Hen: Those who create it, support it.

Through involvement, people develop deeper understanding and commitment.  People need an opportunity to “muck around.”  Often its not enough to just announce what needs to be done and expect people to follow through.  Unless they really understand the “essence” of the initiative, they may make decisions that pull in the wrong direction.  And when they do understand, if they don’t believe it’s important, they will not act strongly and consistently in ways to support it.   This means it’s important for key stakeholders to be involved early on.  Remember the adage:  Tell me and I will forget;  Show me and I may remember; Involve me, and then I will care.

The process is as important as the product.

Too often the desire for fast implementation and action causes us to focus on the product and not the process.  Like Dan, many people do not have patience with “p” words.  Did our strategy session work out? Yes, quite well, because Dan finally understood the importance of those “p” words and was willing to put his personal preferences aside.

Remembering that the process is as important as the product can save you a lot of time in the long run.

A Mosaic of Musings on Vision and Leadership
I Think We Have a Vision. It Must Be Around Here Somewhere.