How to Deal With a Steamroller Personality on Your Team

3 Approaches to Culture Change: What Works
The Best Way to Listen 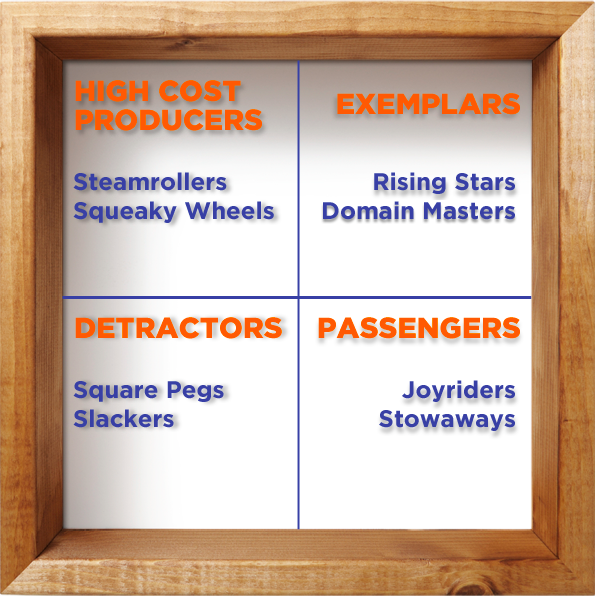 In this guest post, Mike Figliuolo explains how to deal with a steamroller personality, one of the personalities described in his new book, Lead Inside the Box: How Smart Leaders Guide Their Teams to Exceptional Results.

Heather joined your team a year ago. You hired her after interviewing many qualified candidates. Her résumé was far and away the best you saw. You ended the interview with a “let me convince you why you should take this job” pitch hoping you could get her to accept the role immediately.

The only warning flag you saw was feedback from Heather’s references. While they confirmed the glowing results she claimed on her résumé you sensed reticence on their part. You heard their answers trail off leaving an unsaid “but…” hanging at the end.

After Heather started work, you realized your assessment of her competence was right but maybe your inner voice had been correct about the doubts you had. Heather got off to a fast start and proved to be an amazing producer of results. However, Heather presented you with unexpected problems.

Within a few months, all her peers mentioned she was challenging to work with. They agreed she “knows her stuff” and “gets things done” but they said she was making others unhappy in the process. Heather tended to barrel along and do her work without coordinating with others. There were several miscommunication situations where you had to intervene to smooth things over. Others found Heather unpleasant to work with. The angst she produced eroded your team’s morale.

The conflict Heather created generated a great deal of stress for you. You found yourself making excuses for her behavior. Some people thought you were playing favorites by letting her get away with her bad behavior. Now you face a dilemma. You’d love to continue getting the great results Heather produces without all the trouble that follows in her wake. Calling Heather a “Steamroller” is a perfect way to describe her behavior and how others view her.

Approaches for Leading a Steamroller Personality

An effective way to lead Steamrollers is to “reduce friction.” You want to continue getting great results while reducing the toll their actions take on others.

Begin by making sure you understand the costs your Steamroller is incurring. Reach out to key stakeholders for feedback about the Steamroller’s bad behavior. Ask them to provide specific examples of negative situations. See if there were damaging effects on operations, personal relationships, or other intangibles like morale and culture.

Next, make sure the Steamroller understands the impact of their behaviors and give them a clear understanding of the problem. See if they’re surprised by the feedback. If so, their main issues could be their empathy and communication skills. Get them training and coaching on these skills. Set clear goals for them to apply these skills and rate their progress.

If the Steamroller isn’t surprised by the feedback but is focused on sharing their side of the story, you have a different challenge to deal with. Make it clear that these behaviors have negative consequences for others – including you – and that they have to start dealing with those negative consequences too. This feedback should make them aware that it’s not only important that they deliver results, but their rating is also a function of how they get those results.

Finally, ensure you factor in the negative impacts a Steamroller has alongside the positive results you note in their performance reviews. If the source of their problems was a lack of awareness or skills in working relationships, provide them a plan for building those capabilities then gain their commitment to that plan.

If they decide not to change their behaviors, make sure their performance ratings reflect the negative impact they’re having on others. If they’re unhappy with these ratings and don’t want to put forth the effort to improve, find them a new role better suited to their attitude. That may mean putting them in a role with less responsibility on another team.

If they don’t care about the negative impacts they’re having, spell out the consequences for continuing to demonstrate these behaviors. Consequences could include withholding bonuses, raises, promotions, and reassignments. Ultimately their behavior could result in termination of their employment.

Steamrollers can destroy your organization’s culture if you don’t get them to stop behaving badly. You may have glossed over these issues in the past – “that’s just how they are” – so be disciplined in the future about giving a balanced rating and meting out consequences.

Mike Figliuolo is the co-author of Lead Inside the Box: How Smart Leaders Guide Their Teams to Exceptional Results – a new book that spells out approaches for leading Steamrollers and other difficult personalities on your team. He’s also the author of One Piece of Paper: The Simple Approach to Powerful, Personal Leadership and the managing director of thoughtLEADERS, LLC – a leadership development training firm. He regularly writes about leadership on the thoughtLEADERS Blog.

Note from Jesse:  All leaders want their team to shine, but people development is often one of the most frustrating and difficult roles of a leader. In their excellent new book, Mike Figliuolo and Victor Prince show how to focus your most precious resource – your own time and energy – to ensure the people you lead maximize their potential as individuals and as a team.

3 Approaches to Culture Change: What Works
The Best Way to Listen