Do an Ethics Check to Navigate the Gray Zone

Let your history inform you, not define you
Top 10 Posts of 2016 by @JesseLynStoner 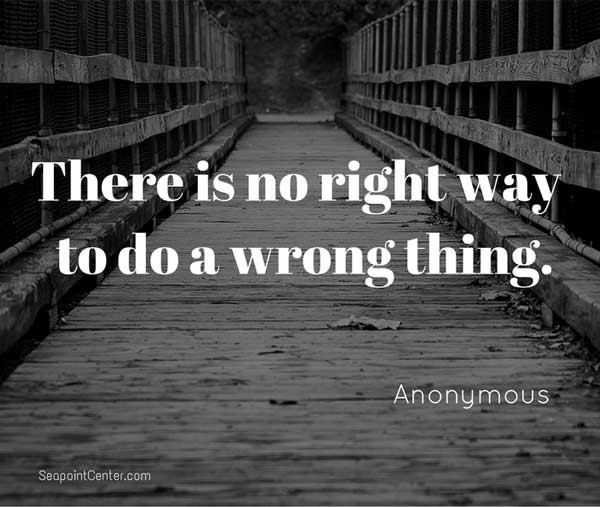 It’s easy to know what’s ethical when your choices are clear-cut.

But there’s a huge grey zone where the choices are not so clear-cut.

What would you do if a close friend confided he had been embezzling from your boss?

What would you tell your teenage son if he came home from his first job at a grocery store and said the owner had instructed him to pack rotten strawberries in the bottom of the containers? You might tell him too bad, but he needs to keep the job or that everyone does this. Or you might tell him to quit because these are not the values you want him to live by. Or you might lay out both sides of the issue and encourage him to make up his own mind.

Ethical decision-making can be challenging in our personal lives. And, when you are in a role that impacts others, it becomes even more critical.

Recently a lawyer shared an ethical dilemma she was wrestling with. A judge had asked for her endorsement for reelection. She thought the opposing candidate was stronger. But this judge was scheduled to hear an important case of hers, and she was concerned that because of the subjective nature of the case, her refusal might negatively influence his judgment.

The right thing to do is not always clear

In 1988 and again in 2006, PBS ran an in-depth series on Ethics in America investigating common ethical dilemmas of scientists, journalists, physicians, jurists, businesspeople, and politicians.

During one segment, they presented this hypothetical “what would you do if” situation to several journalists: During the Viet Nam war, a journalist was traveling with the North Vietnamese so that he might encounter atrocities committed by the South Vietnamese and their American allies. The North Vietnamese discovered a contingent of American troops and prepared to ambush them.

ABC anchor Peter Jennings said he would not film the incident and might try to warn the American troops. CBS’s Mike Wallace reproached Jennings sternly saying, “You’re a reporter. Granted you’re an American, but you’re a reporter covering combat . . . and I’m at a loss to understand why you would not have covered that story.” The right thing to do is not always clear.

There’s a large gray zone between clear-cut right and wrong. It’s easy to use it as an excuse to not worry about being ethical. It’s easy to charge ahead without thinking, and then rationalize your behavior after the fact.

But not paying attention to the ethical considerations can lead to decisions with unintended consequences.

“There’s no right way to do a wrong thing.” — Anonymous

Three questions for an ethics check

In their book The Power of Ethical Management, Ken Blanchard and Norman Vincent Peale describe a simple three-question ethics check to help you navigate through the gray zone.

1. Is it legal?  Not only within the legal system, but also within the organization’s policies. Does it go against a written or unwritten code of behavior?

This question gets you to look at existing standards.

2. Is it balanced?  Will the decision be fair to everyone involved or will someone lose heavily at the expense of another’s gain – in the short-term and the long-term?

This question activates your rational thinking and sense of fairness.

This question is about you and your personal standards of morality.

Doing is harder than knowing

The hardest part of doing an ethics check is not finding the answer, but taking action – having the courage and fortitude to behave ethically.

It becomes even more challenging when you look around and see our leaders behaving unethically, not modeling the standards you tell your children they should live by.

It’s tempting to make the excuse that this is the way things are done. Or to toss away your moral compass because you feel your personal desires are more important.

It might seem easier not to grapple with this – not to label our dilemmas as ethical ones, not to hold ourselves and our leaders to an ethical standard, and to dismiss ethics for the sake of expediency.

Yet today, more than ever, if we don’t face our dilemmas, if we don’t choose to live ethical lives, to run ethical organizations, and to build ethical communities, ultimately we will pay a heavy price – for ourselves, our children, and our future.

Photo Credit: Bigstock/Cre8tiveFocus Do an Ethics Check to Navigate the Gray Zone

Let your history inform you, not define you
Top 10 Posts of 2016 by @JesseLynStoner