Trust Me, You’ll Be Fine! | by Chip Bell
Master Your Brain's Response to Stress for Leadership Success 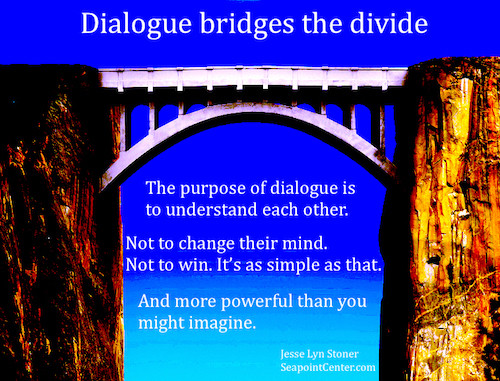 We had not discussed politics since the election, treading warily with each other, neither of us wanting to trigger an unpleasant scene. But tension was just under the surface and seeping out in other forms.

Since the US presidential election, many people have experienced tension with a close friend or family member whose views are different than theirs. My own family is no exception, and I was having particular difficulty with a close family member.

I am deeply concerned about the pervasive polarization and the lack of reasonable conversation. People are heavily invested in hurling accusations at the other side, making all kinds of (often wrong) assumptions about what they’re thinking. The truth is there is no such thing as “the liberal viewpoint” or “the conservative viewpoint.” Things are way too complicated for everyone to hold the same viewpoint, no matter what camp you find yourself in.

My work and writing focus on collaboration and finding common ground, and lately as I work to help resolve the polarization, I’ve been struck by the irony of what I’m not practicing in my personal life. The thought of a conversation with this family member was not appealing as he has strong opinions, a tendency to over-explain his views, and little interest in different views. Nevertheless, it was time.

I sent him an email saying I wanted to know how he was seeing the political landscape these days. I said I wasn’t interested in changing his views, I just wanted to know what they are. I was curious about which issues he cared the most about right now, which decisions and political appointments he supported and if there was anything concerning. I said I wasn’t looking for a long explanation, just to know where he stood.

He called, and amazingly, we had our first respectful political conversation, where he simply stated his views without lecturing about them.

As I listened, I heard things I disagreed with and also things I agreed with. I could understand why he sees things the way he does. I saw that we share many of the same concerns, but don’t necessarily agree on what should be done about it. I saw we were in agreement on several important issues. And I heard some things that caused me to reconsider some of my own beliefs.

Since he did not ask about my views, I kept my observations to myself. But interestingly, simply listening to him was enough to reconnect, and the tension has dissipated.

What did I learn?

It’s possible and important to reach across the divide.

Dialogue bridges the divide. The purpose of dialogue is to understand and learn from each other. Not to change anyone’s mind. Not to win. Solely to understand. It’s as simple as that.

Dialogue begins with listening. In fact, simply listening to each other with the intent of understanding is enough to establish contact and connection.

Four guidelines to build the bridge for dialogue:

1. One person must reach out first, so it might as well be you. Stop waiting to be invited.

2. Make it clear that you simply seek understanding. You are not trying to change the other person’s views and you don’t want them to try to change yours. You might need to repeat that a few times, for the benefit of the other person as well as yourself.

3. Take the time to listen fully. Seeking understanding demonstrates your openness and establishes trust that you’re not trying to change them. And when you listen, you are likely to learn some important things about the other person, and perhaps even your own views.

Trust Me, You’ll Be Fine! | by Chip Bell
Master Your Brain's Response to Stress for Leadership Success