Would You Skydive Without a Parachute? How to Delegate With Confidence.

Ten Good Reasons Not To Delegate
What Brain Science Tells Us: 10 Tips to Prime Your Brain for Success 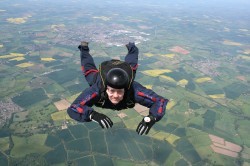 Roger had been working way too much and knew he needed to reprioritize and delegate. But he was nervous about letting go of control and was having difficulty identifying what he could delegate.

I was surprised when he mentioned he was going skydiving to celebrate his 50th birthday.  As a manager, he was practical and task-focused.  This was a side I hadn’t seen before. It was hard to imagine him jumping out of an airplane, totally out of control, free falling at 10,000 feet. It seemed out of character.

Honestly, it would be out of character for me, too. I considered what I would need to be ok about jumping. Here’s what came to mind:

Would you push someone out of a plane without ensuring a safe landing?

Yet that’s what many managers inadvertently do. They assign responsibilities and then disappear without making sure the conditions for success are in place – only to reappear after the splat.

Or they stand next to their people the entire time, micro-managing them, and never let them make the jump.

Both of these approaches to delegation have the same effect:  the delegation fails.  It creates a self-fulfilling prophecy that reinforces their attitude that delegating is risky. No wonder they are reluctant to delegate.

Here are 7 guidelines to be confident you are delegating effectively.

A note to those who have been delegated to:

If someone has delegated to you and it’s not working out, try using this checklist as a diagnostic. Is something not in place? Don’t jump out of the plane without making sure you have a parachute and are confident you know how to use it.

Ten Good Reasons Not To Delegate
What Brain Science Tells Us: 10 Tips to Prime Your Brain for Success