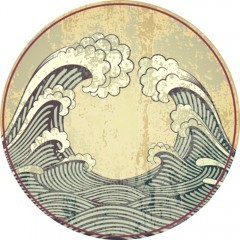 Like a great wave, cultural stories carry us along, creating a coherent view of our world. For example, the phrase the “American Dream” evokes a story that has inspired generations to believe that no matter who they are, by working hard, they have the opportunity to succeed.

When such a narrative peaks and starts to decline, no longer living up to its promise, a new wave of possibilities begins to churn. Small, even invisible at first, some stories catch on and a new narrative wave forms as the old one dissipates.

As a new story grows strong enough to compete with the old story, some of us feel confused, betrayed, depressed, or lost. Others are elated and inspired.  You may find your own or others’ actions disconcerting, frustrating, mysterious, or just plain nutty.

In a time of competing narratives, Berkana Institute’s Two Loops Theory of Change makes visible five roles that naturally emerge. The better you understand these roles, the better you can: 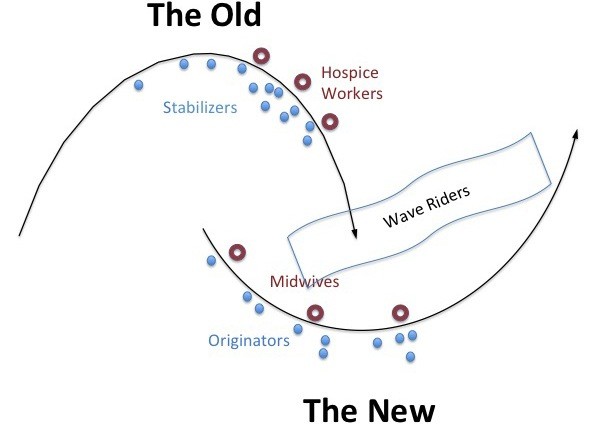 Roles That Maintain the Old While Inventing the New

1. Stabilizers focus on the current organization. At their best, they prevent collapse by keeping old forms stable until new forms have matured enough to carry us forward. They provide critical support from inside the organization during changing times. If they are not conscious of their role, their focus on protecting the old systems can keep them entrenched, blocking the new and vital from coming into its own.

2. Originators experiment with a range of ideas, from the hair-brained to the brilliant. Long before the old system peaks and begins to collapse, isolated experiments start appearing in the gaps that the old story never handled well. Originators see the world with new eyes, bringing passion, determination, and imagination to address their frustrations with the way things are and to bring their dreams about what’s possible to life.

These two roles are caught up in two primal, vital, and conflicting forces: maintaining the old and inventing the new.

Roles that Support the Transition

3. Hospice workers help us to mourn what is dying. Without the benefit of a formal role, cultural hospice workers do similar work for organizations and communities. A newspaper editor once told me, “That’s what I’m doing for my organization.”

Cultural hospice workers help the stabilizers, who are experiencing their way of life dying, to let go. Hospice workers also help those who are angry or frustrated by inflexible stabilizers to see other perspectives. Hospice workers make space for more compassionate responses. For example, they can put in context the actions of many stabilizers, who feel responsible for people who rely on the old system, the values that informed it at its best, and jobs that will be lost when it dies.

Like a metaphorical funeral, hospice workers help us all to move on by encouraging us to honor past contributions, to thank stabilizers for their work and sacrifices, and to notice values that still hold meaning. When stabilizers know their contributions have been appreciated and something essential – like enduring values — are still relevant, they are better equipped to transition. Sadly, they are least lovable and hardest to thank when they are most entrenched in protecting the old system. Hospice is tough work!

4. Midwives help originators to launch. Have you ever heard the painful and exhilarating cries of new birth? Cultural midwives lend a helping hand with funding, emotional support, contacts, good wishes even when ideas seem crazy, as well as providing an occasional garage to build a prototype. When brash originators offend us because they are determined to bring their visions to life no matter the cost, midwives help us see the gifts and possibilities in their vision.

Midwives connect originators with each other, providing much needed nourishment and encouragement as their ideas take shape.  Midwives help the rest of us by illuminating the vital and vibrant activity that bubbles when most of us are fixated on the old system collapsing. As Peter Block observed in Community: The Structure of Belonging, big ideas start small, slow, and underfunded. By pointing us towards what is being born, midwives support the next wave to rise.

5. Wave riders assist us in transitioning between old and new stories. Part hospice worker, part midwife, and all storyteller, they assist us in seeing what endures from the past that still matters while embracing what has meaning in what’s new and emerging.

Have you ever gone back to somewhere familiar only to discover it is no longer what you expected? Wave riders help us understand the changing story, and make a mindset shift from who we were to who we are, and even to glimpse who we are becoming. They make visible the differences that matter, inspiring us with possibilities, assuring us with enduring values, and naming what’s emerging. By doing so, they bring something new into being. 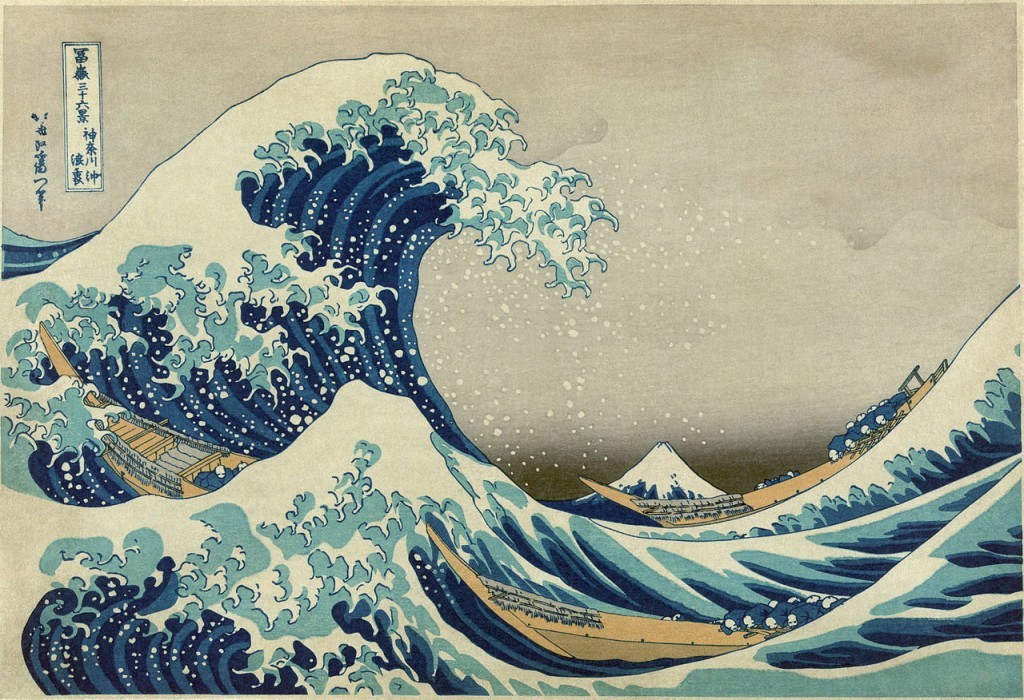 The Two Loops Theory reminds me of the Great Wave off Kanagawa, a famous woodcut by Japanese artist Hokusai.

The old wave looks threating to the small boats, each at a different point in its journey. The new wave is just beginning to rise, carrying its passengers on their way.

The picture is a great reminder that the waves are always moving. Nothing stands still.

Peggy Holman has helped explore a nascent field of social technologies that engage “whole systems” of people from organizations and communities in creating their future. In The Change Handbook, 2nd edition, she and her co-authors profile 61 change processes.  Her award-winning book, Engaging Emergence: Turning Upheaval into Opportunity, dives beneath these processes to make visible deeper patterns, principles, and practices to guide us through turbulent times. These days, Peggy focuses on the intersection of journalism and civic engagement through Journalism that Matters, a nonprofit that convenes conversations to foster collaboration, innovation, and action so that a diverse news and information ecosystem thrives.  She applies the ideas in this post to journalism on the JTM blog.