Coaching Tips for Managers – When the Bicycle Moment Occurs

The Process is as Important as the Product: 7 Tips to Manage Both
Create a Vision With Staying Power 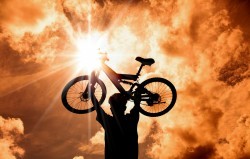 My best boss was also my mentor. He coached me and supported my development, even though it meant I was likely to get promoted. He showed me it is possible for a manager to focus on results and develop their people at the same time.

When eventually I was offered a new position, I confided in him that I wasn’t sure I was ready. His response was,

This has become the mantra I repeat whenever I’ve taken a stretch assignment or felt unsure of myself.

In my own role as a leader, I share his attitude about development. A lot of people want to hire what they call “winners,” people who are already competent. But my definition of  ‘winner” is someone with the right values and with potential to grow into the job. It’s my job to help them grow. My reward for being a good manager is that the people who report to me move on. I don’t want them to stay out of loyalty. I want them to fulfill their potential – to know what their dreams are and then to reach for them.

Here’s what I’ve learned about coaching as a manager: It’s easy to be a coach when it means providing direction, giving advice and solving problems. Like most leaders, I’m good at it, and I like to do it. Fortunately it’s exactly what people need early on while they’re still learning.

But there comes a point where a shift in the relationship needs to occur – where you let go of actively advising them, and they take the lead. It’s what I call the bicycle moment.

Do you remember learning to ride a bike? Most of us had someone big running next to us, holding onto the fender, supporting us while we peddled. And at some point they let go. If you were like most of us, you continued for awhile and then fell. Where was the big person? Still there, watching from behind. They came to where you were sitting on the ground, praised your accomplishment and encouraged you to get back on the bike. Did they put the training wheels back on? Probably not.

How do you recognize that moment – that it is time to let go? I consider these four questions:

If the answer is yes, it’s time to let go.

This is the most difficult transition because it means a huge shift in your role. Letting go doesn’t mean ending the relationship. It means changing it. Now when there is a problem, instead of telling them what you think, you keep your opinion to yourself and ask them questions like,

“What do you think?”

“What did you learn?”

“Where can you get help?”

It’s a listening and reflecting role.

The point is to help them to become self-reliant problem-solvers.

– To know what they know.

– To know where and how to access help when they need it.

– To develop the confidence they need to move forward independently.

At that point, you watch – but from a distance, like in the bicycle moment. And your gratification now comes from watching them fly instead of from being the wise advisor.

The Process is as Important as the Product: 7 Tips to Manage Both
Create a Vision With Staying Power