Whitney Johnson on Building an A-Team 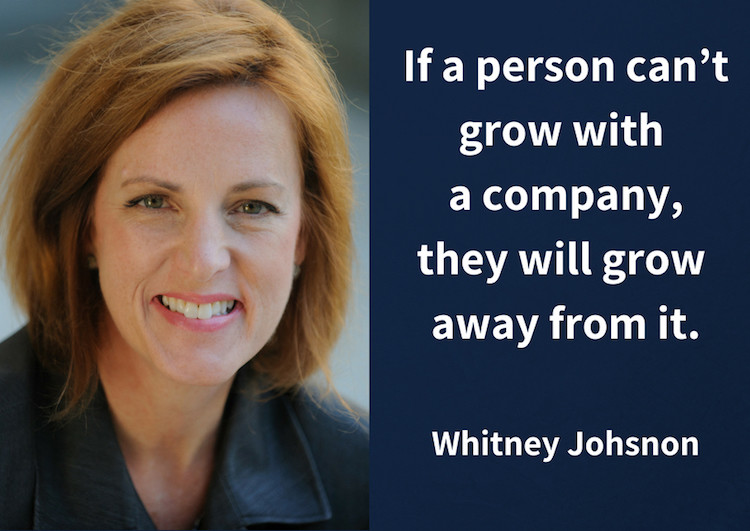 I had the pleasure of interviewing Whitney Johnson, author of the new book Build an A Team: Play to Their Strengths and Lead the Up the Learning Curve. Whitney has done ground-breaking work in the arena of personal disruption – applying these concepts to individuals, not just organizations.

I read Whitney’s new book Build an A Team with interest because it’s a natural progression of the work she been doing with personal disruption and career disruption. In her last two books she showed how disruption applies to individuals and in their careers. Her new book shows how managers can use these ideas to develop their team.

I am delighted to share our conversation in a unique format – a combination of written and audio. I hope you enjoy what Whitney has to say as much as I did.

Question 1: Hi Whitney, once again it’s a pleasure to talk with you. I think the best place to start is with a little information abut  your own personal journey and how leaders have (or have not) supported your growth?

Whitney’s response: I had this experience of working on Wall Street, been award-winning and was ready for something new. I had always liked mentoring, and so approached a senior exec about the prospect of developing and moving into management. He was dismissive. In retrospect, I could have managed this better, but when I realized that I was at the top of a learning curve, and they liked me right where I was. I could see there was nowhere else for me to go. Within a year I left. This scenario plays out in every day in companies across the globe.

Question 2:  What I especially appreciate about your approach is that you challenge the current thinking about “getting the right people on the bus.” Instead of going out and finding the right people, you make the case that it’s better to develop the right people. But this is not just another book telling managers that development is one their primary roles  – you approach development from the perspective of leveraging disruption, challenging the mindset that growth occurs as a result of a slow, development process.

You tell several interesting real-life stories in your book of how managers helped their team to use personal disruption to slingshot forward. Can you share the story of Vala Afshar, who was disrupted several times moving from engineer to customer service to becoming Chief Marketing Officer and now Chief Digital Evangelist of Salesforce? Vala’s boss came to him and suggested he move into customer service. What happened next?

Question 3: In your book you describe an S-Shaped Learning Curve and what managers needs to do to support their team during each stage of the learning curve. Most people don’t hear from their boss unless they’ve done something wrong. In your model, there is a lot more conversation going on. What’s your view on feedback and the kind of conversations that need to take place as your team moves through the learning curve?

Question 4: You make an interesting recommendation – that when building a team, hire toward the low end of the learning curve. Can you tell us why you recommend this?

Whitney’s response: There are very compelling reasons to hire for potential, not for proficiency. To really view people as the resources we claim to view them and to be willing to develop them over time. When you’re willing to hire people at the low end of their learning curve, what that means is that time is on your side. If you’re willing to hire at the low end of the curve, or even in the sweet spot, then you’re going to get two to three years out of this person, where they’re highly engaged, very happy, highly productive, which is good for them and good for you. One of the ways that you can do this is when you’re writing your job descriptions, look for and be willing to talk a little bit about potential, instead of writing a job description for a top of the curve role.

Question 5: Let’s talk about the role of managers when people reach the top of their learning curve. Typically this is when people leave an organization, where there are no more opportunities for growth. What can managers do to keep their A team at the top of their game to help them leap to new learning curves? In your book you talk about the AID model. Can you explain what AID stands for and why it is so important and powerful?

Question 6: You used a wonderful metaphor to describe building a team. You say it’s like baking a loaf of bread. Can you explain what you mean by that? 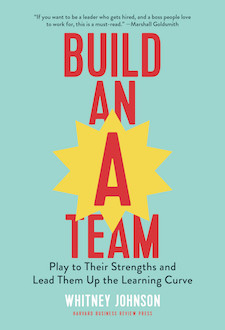 About Whitney Johnson: One of the 50 leading business thinkers in the world (Thinkers50); Whitney Johnson is an expert on disruptive innovation and personal disruption, a framework codified she in the critically-acclaimed book Disrupt Yourself as well in her newest book published by Harvard Business Press – Build an ‘A’-Team: Play to Their Strengths and Lead Them Up the Learning Curve. Her proprietary framework and diagnostics were developed after co-founding the Disruptive Innovation Fund with Harvard Business School’s Clayton Christensen. Whitney is a former award-winning stock analyst on Wall Street, WBECS faculty, in the original cohort of Marshall Goldsmith’s #100 Coaches a Coach for Harvard Business School’s Executive Education, a Harvard Business Review Contributor and a LinkedInfluencer. Whitney lives in Virginia with her husband and two children.