A Big Goal Is Not The Same As a Vision 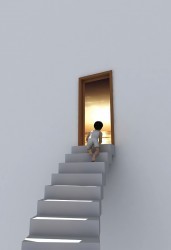 When you have a vision, you know where you want to go and you can see your next steps – but you won’t be able to see the entire path.

Vision is not about the path, it’s about the destination. As you take each step, the next step becomes clear as long as you stay focused on your vision.

Goals quantify and define the steps you must take. They are the signposts that let you know you are moving in the right direction. They are measurable and answer questions like When? and How much? (rather than Why? which is addressed by your vision).

Too often leaders set goals without first answering, “For what purpose?” and without clarifying their values. When goals are not connected to a clear purpose and values, people often work at cross-purposes with each other, not “rowing in the same direction.” Unsure of the purpose of their activities and without values to guide them, they remain dependent on leaders to provide direction.

A goal can have a picture of the end result and still not be a vision.

If you have a goal to lose weight, it is very helpful to create a mental image of yourself looking thin. It is powerful to create a picture of what you want (rather than struggling with what you want to resist). You can more easily sustain your energy and commitment. However, even though you have a powerful picture, losing weight is a goal, not a vision. Unless it is connected with a vision of something greater, like a healthy body or positive self-image, you are likely to put the weight back on.

A vision is enduring and provides clarity for the next step. A goal ends.

One way to distinguish between a vision and a goal is to ask, “What’s next?” A vision provides clear ongoing direction—it is clear what you should do next. As you take each step, the next one becomes clear. A vision continues to act as a beacon, guiding you in setting new goals once current ones have been achieved.

Once you have reached your goal, it is finished. Future direction is unclear because the goal was an end unto itself.

Consider these two examples – one of a vision, the other of a goal.

Martin Luther King Jr. described his vision of a world where people live together in mutual respect. In his “I Have a Dream” speech, he described a world where his children “will not be judged by the color of their skin but by the content of their character.” He created powerful and specific images arising from the values of brotherhood, respect, and freedom for all—values that resonate with the values that founded the United States. The test of this vision is that it continues to mobilize and guide people beyond King’s lifetime.

President John F. Kennedy announced a goal for the Apollo Moon Project: to put a man on the moon by the end of the 1960’s. The underlying purpose and values were not clear. Was the purpose to win the space race? to begin the space defense initiative? or in the spirit of Star Trek “to boldly go where no one has gone before”?

The image of the end result was powerful; therefore, the goal was reached in the face of overwhelming obstacles. But lacking a vision that provided the answer to “What’s next?” NASA has shown neither clear direction nor outstanding performance since.