We don’t see many examples of companies taking a stand for their values. My own observation is that most companies are driven by profits, not values. Most leaders see values and profits as belonging to different realms  – values on the “soft” side and profits on the “hard” side of business.

Every once in a while, we see an example where a company puts values before profits. There’s the well-known story of how Johnson and Johnson immediately and voluntarily pulled 31 million bottles of Tylenol capsules from store shelves in the wake of the 1982 “Tylenol Tampering Murders.”

At the time J&J leaders made that decision, it looked like it would put them out of business. In the end, their actions actually made them heros and their profits increased. But it’s important to recognize that at the time they made that decision, they had no idea what the financial impact would be. They made the decision based on values, not profits.

That was 35 years ago, and we’re still telling this story because the decision to take a visible stand putting values before profit in a high-risk situation is so rare.

Fortunately, we do see many examples today of profitable, values-driven companies – companies where values are embedded in every aspect of its culture and how it runs its business – such as Disney, Zappos, Southwest as well as many small to mid-size companies like Berrett-Koehler Publishers. And gratifyingly, we see that these companies are profitable. It’s important to tell the stories of these companies and challenge the notion that values and profits belong in different realms.

Patagonia is one of these profitable, values-driven companies. An accredited and founding member of the Fair Labor Association, its website is as much an educational tool about environmental and social responsibility as it is an online store.

In 2014 they were featured in a Fast Company article “How Patagonia’s New CEO Is Increasing Profits While Trying To Save The World.” Since the time Rose Marcario had joined Patagonia as CFO in 2008, Patagonia had doubled its scale of operations and tripled its profits. At the time she became CEO in 2014, they had about $600 million in revenues. An inspiring example of how a values-based company can also be profitable.

However, on December 4, 2017, Patagonia gave a new definition to what it means to be a values-driven company. They took a strong stand that put their company at risk around an issue that did not directly affect their business.

Taking a public stand when the company itself is not under pressure… putting purpose before profits when the issue is not impacting their business… is something we don’t see often at all.

Whether or not you agree with their stand, the fact that they took such a strong stand for an issue aligned with their values but not directly tied to their financial model is nothing less than astounding.

On December 4, 2017, responding to lobbying efforts for access to uranium and coal deposits and to states’ pressure to sell public land, President Donald Trump signed a proclamation to shrink the Bears Ears and the Grand Staircase-Escalante national monuments by more than 1.1 million acres (85%) and more than 800,000 acres (46%), respectively.

Within hours, Patagonia changed the home page on their website so this is the only thing you saw. No links to any of their products. Simply a request to take action and, if you scrolled down, an explanation of why Patagonia takes a stand. 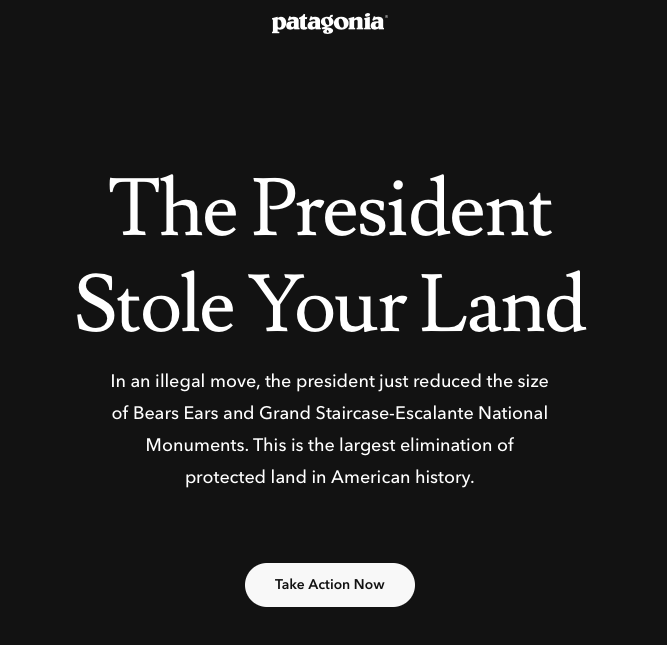 They also created this 90-second video showing the spectacular beauty of the national parks that will no longer be protected.

Two days later, they also filed a suit to block Trump’s decision in Washington federal court. Similar cases have been brought by environmental groups and Native American tribes, but Patagonia is the first retailer to get embroiled in such litigation.

The Risk of Taking a Stand

It turns out that Patagonia’s stance was good for business, at least in the short-term. But that was not assured any more than it was in 1982 when Johnson and Johnson made their values-based, high-risk decision. Nor is it assured it will continue to be good for Patagonia’s business in the long term.

Patagonia will be under attack by the Trump administration and supporters for a long time. Patagonia’s values will be misrepresented, their motivation will be misconstrued, and there will be an attempt to discredit Yvon Chouinard, founder and owner, and the Patagonia leadership team. It will be unpleasant for them personally in the short-term, and how things will play out for them in the long run is unknown.

But a values-driven company acts in concert with its mission. And Patagonia’s mission is: Build the best product, cause no unnecessary harm, use business to inspire and implement solutions to the environmental crisis.

And sometimes, if you are values-driven, you have to take a stand because you believe it’s the right thing to do, even in the face of risk.

The Risk When Patagonia Takes a Stand