6 Questions to Uncover the Purpose of Your Work
Help Your Team Get Unstuck: Ask What Business Are You Really In? 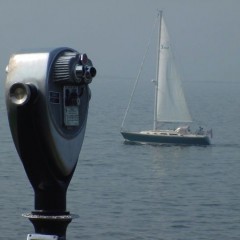 Recently a business colleague startled me by stating “vision is oversold and overrated.”

I was surprised because, although leaders often don’t know how to create a vision, I assumed they believe it is important.

To be fair, my friend wasn’t saying that vision isn’t important; he was saying it’s less important than purpose and strategy.  But still, it sounded provocative and worth considering.

Is vision no longer relevant?

I reflected on other times leaders have dismissed the importance of vision.

Of course there’s the famous comment that plagued former US president George Bush. During his 1987 campaign, when he was urged to stop focusing on the small pieces and figure out where he wanted to take the country, he replied with an irritated “Oh, the vision thing.”

Not only did that phrase haunt him throughout his presidency, it has since earned a place of its own in Wikipedia. Mr. Bush is also distinguished as the last US president to serve only one term.

“The last thing IBM needs is a vision.”

Another well-know dismissive remark about vision came from Louis Gertsner, Jr. in 1993 when he took the helm of IBM — “the last thing IBM needs is a vision.”  For months after he made that statement, I was frequently asked what I thought. I always replied that it depended what he meant by “vision.”  If he meant a pie-in-the-sky dream that wasn’t connected to daily life, he was absolutely right.

At that time, IBM was in big trouble, with losses of $8 billion a year and morale at an all time low.  He needed to turn the ship around quickly and patch the holes below the waterline.  But would he also need a vision of where he wanted to take the organization? Ultimately yes – because without a shared understanding of where they were going, the holes might be plugged, but the ship would be dead in the water.

Two years after taking the helm, after dealing with the immediate crises, Mr. Gertsner announced IBM’s new vision and the strategy to achieve it — a return to IBM as a customer-focused provider of computing solutions, employing network computing as an overarching strategy. This vision guided his famous turnaround, detailed in his 2002 book, Who Says Elephants Can’t Dance?

“If you don’t know where you’re going, it doesn’t matter what path you take.”

So, are purpose and strategy enough?

I think the real problem is:

Vision is overused and under-defined.

A real vision is not a catchy phrase or slogan that is disconnected with the reality of life in the organization.  Nor is it a vague statement like being “number one.” A real vision shows you where to go and makes you want to go there.  It provides a picture that you can actually see in your imagination.

A real vision is clearly understood by everyone, engages their hearts and minds, is tied directly to their real work, and provides guidelines for making decisions.  And a real vision is enduring—lasting beyond the leadership period of the person who originally articulated it, whether that is the vision of Martin Luther King, Jr. or Herb Kelleher’s vision for Southwest Airlines.

The process of creating the vision is as important as what it says.

Many people have developed a cynical attitude toward vision because of the ways it has been misused.  Recently, a colleague shared this description of her own experience:

Ten years ago I quit my job as a manager in a large corporation during a siege known as “Redeployment,” replete with Vision and Values Workshops, many of which I was asked to lead.  It was a farce.  The company was downsizing, people were losing their jobs, and those who stayed felt bad for their friends and colleagues and insecure about their own jobs.  The platitudes in the vision meant nothing.  As a manager, I felt like we were trying to sell them a bill of goods instead of helping people deal with the reality of what was happening. Being part of the charade got to be too much for me, so I left.

If Louis Gertsner had arrived at IBM and tried to “sell” the people on a lofty vision, he would have been met with skepticism and would have lost credibility. He needed to address the immediate crisis, which included restructuring. Later, he was able to engage his team in a process that clarified the direction that would turn IBM around.

I have come to the conclusion that Gertsner was right. Sometimes vision is not the first thing you need, but the last thing you need is a vision – if it matters where you’re going.

6 Questions to Uncover the Purpose of Your Work
Help Your Team Get Unstuck: Ask What Business Are You Really In?