Are You a Team Player or a Ninja? 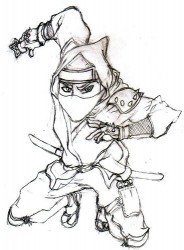 You might think you’re a team player, especially if you’re the kind of person who gets things done and is committed to helping your team meet its objectives. But if you don’t also pay attention to how your team works together, you may actually be a ninja – acting solo in service of your team.

The problem with being a ninja is you can inadvertently undermine your team’s effectiveness.

Meet James, a Ninja in Disguise.

When James was asked if he would like to join the new product team, he accepted enthusiastically. He had expertise in several product lines, had launched new products before and prided himself in being a team player.

The company was interested in extending their reach into new markets, and the team was charged with determining which market to enter and designing the product.

After weighing recommendations from several department leaders and a long deliberation, the team came to consensus on their recommended market. The next day they received an email from a department leader making a detailed case for a completely different approach.

Ninja Action:  James sent an email to his team that was enthusiastic about the new recommended approach… and he copied the department leader on his email.

The Effect:  Not only did the team need to meet again to reopen their decision, but also after careful deliberation where they clarified once again their original decision was the best one, they now had to deal with the expectations of the department leader James had copied. James actions caused a lot of extra time and effort for the team, and the disappointed department leader never entirely supported the team’s recommendation.

After getting approval for the concept of the product line, the team needed to plan the details – exactly what the offering would look like, how they would go to market, etc.

The question of branding came up. The team decided there were other priorities, and they should wait.

Ninja Action: On his own initiative, James went to the marketing department who spent considerable time developing three options that James then presented to the team.

The Effect: James thought he was furthering the team efforts. However, it was premature, as the team hadn’t outline specifications for what message they wanted to convey. Because of the efforts by the marketing department, the team was felt they needed to choose one of the designs.