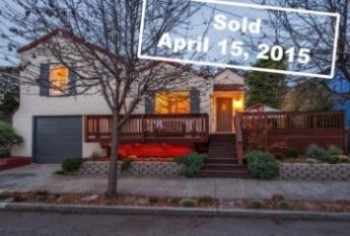 You might think this has become a transactional world, where important decisions are made solely on the basis of price. It certainly might look like that, especially in the wild San Francisco Bay real estate market where housing prices are at an all time high and competition is fierce.

But my experience last month challenges this belief.

I moved from the east coast to the San Francisco Bay area last summer. It was a big move to leave a community I’ve been part of for over 30 years; but all of my family had migrated out west over the years and I wanted to be closer to them.

I took a temporary rental in a lovely neighborhood near my cousin so I had time to look for a permanent home.

Over the winter I looked sporadically at houses in the neighborhood, but there was very little on the market and those that were flew off quickly. I hadn’t seen anything I wanted. But in April, just as I was starting to get concerned, my cousin called and said she had seen a house she thought I should take a look at. I went over with her, and to my surprise, the minute I walked into the house I thought, “This is where I want to live.” No doubts. It was absolutely perfect for me – both the house and the neighborhood.

I looked at my cousin and said, “I’m going to make an offer.” I’m not an impulsive person (which explains why it took me so long to move out west), so for me to have such a strong sense that this was the right house is quite unusual.

In the SF Bay Area, the way the housing market works is like an auction. Houses go on the market for about ten days. Bids are due by a deadline on the last day, and the owners then decide which bid to accept.

Two days before the deadline, I sat on a plane flying to Florida, contemplating what to say. I loved the house, the energy, and everything they had done to fix it up. I want to live in a multi-generational, diverse neighborhood. But it was more than that, and I struggled to name it. Then it struck me – this was their first house and it would be my last house. It was the circle of life. I wrote the letter and was satisfied it had captured my intent.

With these three things in place, I figured I had done everything I could, and the only way I would lose the house would be if someone made an irrational offer.

But that’s exactly what happened. Shortly after the deadline, my real estate agent informed me someone had made an “out-of the ballpark” bid. She invited me to increase my bid, but I had already gone all in and there was nothing I could do.

As consolation, she sent me a link to a new listing.

However, I didn’t open the link. I wasn’t ready to walk away from this house. Instead, I started wondering if there was something else I could offer besides money.

Consulting services? Team building? Facilitating shared vision? None of these seemed like they would appeal.

Then I remembered: I just happen to know a fire chief in the town they are moving to. He reads my blog and has corresponded with me several times over the past few years. I think at one point, the entire fire department subscribed to my blog. I could make an introduction. You never know when having a connection with an official who knows the politics and government systems of your town will come in handy.

What else? I have 4 one ounce American Gold Eagle coins that I had been saving for something special. They’re kind of cool and would be a good thing to have if the financial market collapsed.

I thought of a few more things like: They could stay at the house if they want to come back for visits. I could but down a larger deposit. We could close the next day if they wanted.

I sent the owners an email saying how much I wanted to live in the house, that I had gone beyond my financial means, and listed my alternative ideas.

Relationship currency is the lynchpin.

What I was offering instead of money? Relationship.

To the surprise of the real estate agents, it worked. The owners were deeply touched by my letters. I received a letter from them saying that although they had a higher bid, they felt the house had picked me and they wanted me to have it. They wanted the introduction but took only two of the gold coins (one for each of their children). The alternative currency items were written into the buy-sell agreement, and we closed seven days later.

Our beliefs shape our experience.

It is said that experience shapes our beliefs. In fact it is the opposite. Our beliefs shape our experience.

Because I believed that relationship currency is worth more than money, I didn’t just walk away when I found out I had been outbid. Instead, I began to think creatively about alternatives.

You won’t always get back what you give, but give anyway.

Several years ago I donated several copies of my book Full Steam Ahead! Unleash the Power of Vision to this fire department. I had no expectation of getting something in return and in fact, never mentioned it to anyone. I never would have guessed that my relationship with that fire department would become the lynchpin to buying a home.

People talk about the payoff from investing in relationships; and it’s true, it’s a good idea to nuture relationships. But you never know which relationship is going to “payoff.” It’s possible none will. It’s better to just help people out because it’s the right thing to do, without an expectation that you’ll get something in return.

I have found I am a happier person when I give more than I take and when I can make a difference in another person’s life. And sometimes, just sometimes, what you put out does come back to you from unexpected sources.

Have faith in the potential of the next generation.

This experience has renewed my faith in humanity and in the future that lies in the hands of this next generation – that not all decisions are being made solely on a transactional basis, and that the currency of relationship can be as strong a force as the dollar.

I’ve told this story to many people who have been deeply touched, and I decide to share it more widely. We hear so much about all the things that are going wrong and not enough about the good things. There is much more than I was able to include in a blog post length, and the story keeps unfolding and gets better. I hope this helps show that although it’s easy to focus on negativity because we are bombarded with it, when you look around, you can see there is a lot of goodness and generosity in this world.