Give Me The Facts, Just the Facts 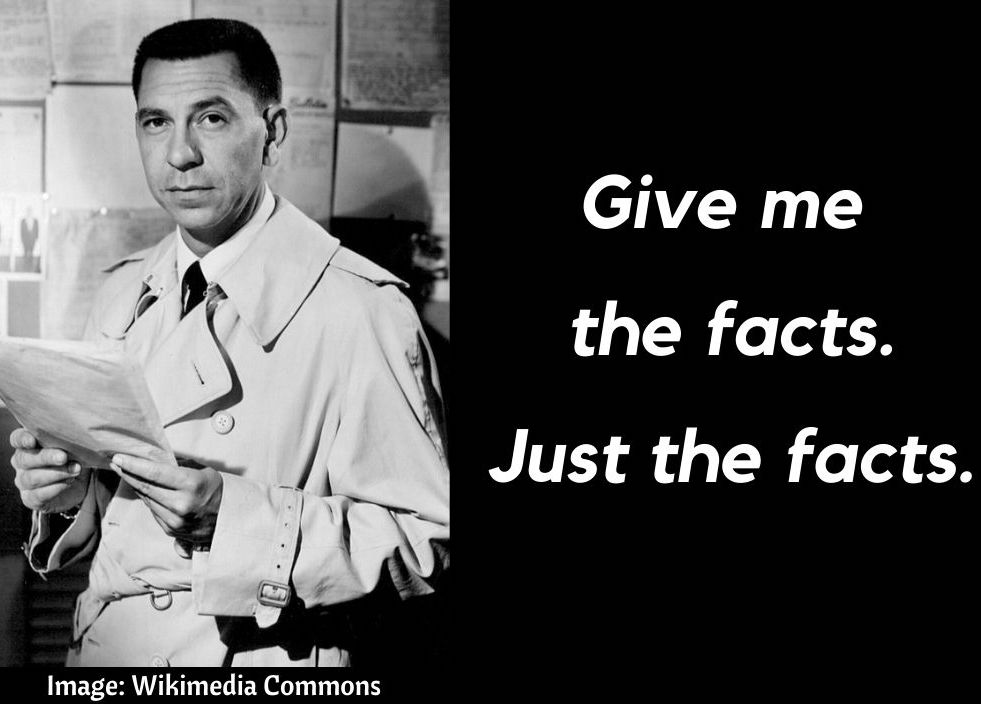 Facts are bite size pieces of reality. There is no such thing as an “alternative fact.” If you start to believe there are alternate realities, it will make you crazy because there is nothing you can depend on.

2 + 2 equals 4. The sun rose this morning. You need oxygen to breathe. These are facts. You can count on facts to be true and to remain true.

Ideally your conclusions are a result of a clear line of sight back to the facts. However, you can get into big trouble if…

Become a truth detective and get the facts, just the facts, before you try to make sense of them.

Facts become disinformation when they are combined with lies.
Disinformation becomes the basis for illogical conclusions that appear logical.
And even if you haven’t bought into a full-blown conspiracy theory, you still end up with a distorted sense of reality.

From Distortion to Polarization

When you accept too much disinformation without verifying the facts, you get caught in a distortion field. When enough people join the same distortion field, they become a group. The group filters all new information through their shared beliefs, which creates an echo chamber that strengthens the group distortion. The group’s existence is threatened by ideas and people that conflict with the distorted viewpoint that holds the group together. Information that conflicts is quickly dismissed. People who do not share the viewpoint are rejected. However, any information that supports the shared view is readily accepted without question.

Recipe for Group Distortion
• Take a few facts and sprinkle generously with lies.
• Repeat frequently and loudly, while it ferments.
• Meanwhile create distrust around facts that conflict with your desired conclusion.
• Half-bake the mixture and then, share widely.

It’s easy to see this when you are looking at a group you don’t identify with. But if you are hoping that one of those people will read this article and recognize themselves, consider this:  one of them is probably reading this article, hoping you will recognize yourself.

When you look at the level of polarization that is occurring today, especially in the United States, it’s likely most of us have accepted some distortion. I would go so far as to say, the angrier you are at those who do not hold your view, the more likely you are to be entrenched in group distortion.

Seven tips to surface and verify the facts.

The truth is not relative. But to find it, we need to be ruthless and relentless about verifying the facts. It’s a cop-out to say it’s not possible to determine the facts. It’s true that there is a tremendous amount of disinformation being presented as fact, on the news, in print, and on social media. But facts do exist, and here are seven tips to help you dig them out.

It takes a little time and effort to dig for the facts. But what’s the alternative? We live in the age of information and the floodgates have been opened. Our task is to learn how to live successfully in this age. If you’re not willing to do the work, your only other choice is to outsource your thinking, and hope you don’t get caught in a group distortion field.

Photo credits: Wikimedia Commons | The Channel Surfer | Give Me The Facts, Just the Facts